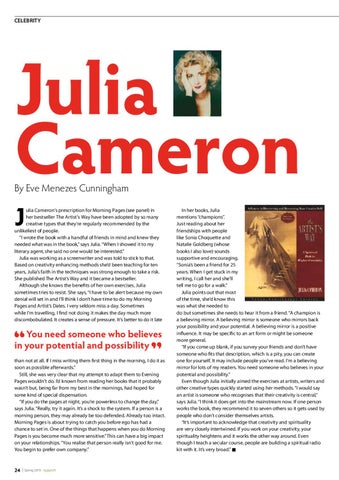 ulia Cameron’s prescription for Morning Pages (see panel) in her bestseller The Artist’s Way have been adopted by so many creative types that they’re regularly recommended by the unlikeliest of people. “I wrote the book with a handful of friends in mind and knew they needed what was in the book,” says Julia. “When I showed it to my literary agent, she said no one would be interested.” Julia was working as a screenwriter and was told to stick to that. Based on creativity enhancing methods she’d been teaching for ten years, Julia’s faith in the techniques was strong enough to take a risk. She published The Artist’s Way and it became a bestseller. Although she knows the benefits of her own exercises, Julia sometimes tries to resist. She says, “I have to be alert because my own denial will set in and I’ll think I don’t have time to do my Morning Pages and Artist’s Dates. I very seldom miss a day. Sometimes while I’m travelling, I find not doing it makes the day much more discombobulated. It creates a sense of pressure. It’s better to do it late

You need someone who believes in your potential and possibility than not at all. If I miss writing them first thing in the morning, I do it as soon as possible afterwards.” Still, she was very clear that my attempt to adapt them to Evening Pages wouldn’t do. I’d known from reading her books that it probably wasn’t but, being far from my best in the mornings, had hoped for some kind of special dispensation. “If you do the pages at night, you’re powerless to change the day,” says Julia. “Really, try it again. It’s a shock to the system. If a person is a morning person, they may already be too defended. Already too intact. Morning Pages is about trying to catch you before ego has had a chance to set in. One of the things that happens when you do Morning Pages is you become much more sensitive.” This can have a big impact on your relationships. “You realise that person really isn’t good for me. You begin to prefer own company.”

In her books, Julia mentions “champions”. Just reading about her friendships with people like Sonia Choquette and Natalie Goldberg (whose books I also love) sounds supportive and encouraging. “Sonia’s been a friend for 25 years. When I get stuck in my writing, I call her and she’ll tell me to go for a walk.” Julia points out that most of the time, she’d know this was what she needed to do but sometimes she needs to hear it from a friend. “A champion is a believing mirror. A believing mirror is someone who mirrors back your possibility and your potential. A believing mirror is a positive influence. It may be specific to an art form or might be someone more general. “If you come up blank, if you survey your friends and don’t have someone who fits that description, which is a pity, you can create one for yourself. It may include people you’ve read. I’m a believing mirror for lots of my readers. You need someone who believes in your potential and possibility.” Even though Julia initially aimed the exercises at artists, writers and other creative types quickly started using her methods. “I would say an artist is someone who recognises that their creativity is central,” says Julia. “I think it does get into the mainstream now. If one person works the book, they recommend it to seven others so it gets used by people who don’t consider themselves artists. “It’s important to acknowledge that creativity and spirituality are very closely intertwined. If you work on your creativity, your spirituality heightens and it works the other way around. Even though I teach a secular course, people are building a spiritual radio kit with it. It’s very broad.” 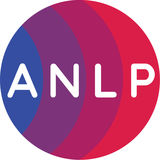 Rapport Magazine is the publication for everyone interested in up-to-date articles and info on NLP and Personal Development.

Rapport Magazine is the publication for everyone interested in up-to-date articles and info on NLP and Personal Development.