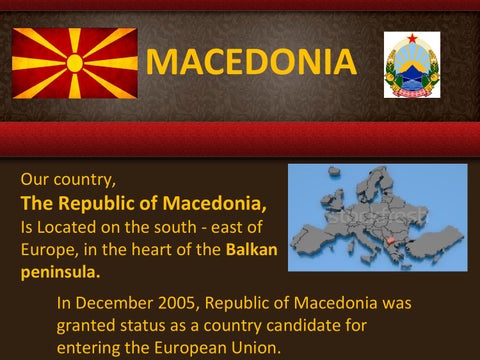 The Republic of Macedonia,

Is Located on the south - east of Europe, in the heart of the Balkan peninsula. In December 2005, Republic of Macedonia was granted status as a country candidate for entering the European Union.

The Municipality of Rankovce, covers an area of 240 square kilometars and it is located in the north - eastern part of Macedonia. It covers the area of “Slavishko Pole” (field), which belongs to the basin of the river “Kriva Reka”. “Rankovce” bordering municipalities are: • • • •

Along the territory of Municipality Rankovce, there is an area called “Slavishko Pole” (field), where is the geographical location of the watercourse and the basin of the river “Kriva Reka”, surrounded by two high mountains, Osogovo and German with mild slopes, beautiful beech and oak forest .

The soil of “Slavishko Pole” is rich with mineral resources – non metal bentonite used in most metal for casting of metals and quartz stone as well. “Slavisko Pole” surrounding mountains like Osogovo, German and Biljino, are rich with forests, water, and potential mineral resources.

Compilation of old and new - Watermill

New facilities to improve the quality of life in the community - New bridge on Kriva Reka, village Opila - Tennis court in Rankovce - Football field in Rankovce

Farming in the municipality

over 1300 meters above sea level

on 400 meters above sea level

on 400 meters above sea level

Farming in the municipality

Artificial lake in Otoshnica as resources for water supply and tourism

with extraordinary clean water from the mountains

River Kriva Reka - the main artery of the municipality

River Kriva Reka - ponds and streams around it

Gratitude for you attention