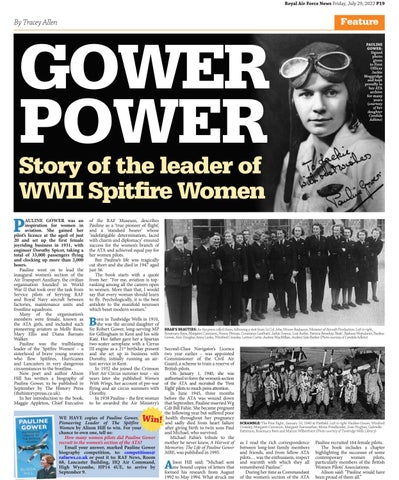 PAULINE GOWER: Signed photo given to First Officer Jackie Moggridge and kept proudly in her ATA archive for many years (courtesy of her daughter Candida Adkins)

Story of the leader of WWII Spitfire Women P

AULINE GOWER was an inspiration for women in aviation. She gained her pilot’s licence at the aged of just 20 and set up the first female joyriding business in 1931, with engineer Dorothy Spicer, taking a total of 33,000 passengers flying and clocking up more than 2,000 hours. Pauline went on to lead the inaugural women’s section of the Air Transport Auxiliary, the civilian organisation founded in World War II that took over the task from Service pilots of ferrying RAF and Royal Navy aircraft between factories, maintenance units and frontline squadrons. Many of the organisation’s members were female, known as the ATA girls, and included such pioneering aviators as Molly Rose, Mary Ellis and Diana Barnato Walker. Pauline was the trailblazing leader of the ‘Spitfire Women’ – a sisterhood of brave young women who flew Spitfires, Hurricanes and Lancasters in very dangerous circumstances to the frontline. Now poet and author Alison Hill has written a biography of Pauline Gower, to be published in September by The History Press (thehistorypresss.co.uk). In her introduction to the book, Maggie Appleton, Chief Executive

of the RAF Museum, describes Pauline as a ‘true pioneer of flight’, and a ‘standard bearer’ whose ‘indefatigable determination, laced with charm and diplomacy’ ensured success for the women’s branch of the ATA and achieved equal pay for her women pilots. But Pauline’s life was tragically cut short and she died in 1947 aged just 36. The book starts with a quote from her: “For me, aviation is topranking among all the careers open to women. More than that, I would say that every woman should learn to fly. Psychologically, it is the best antidote to the manifold neuroses which beset modern women.”

orn in Tunbridge Wells in 1910, she was the second daughter of Sir Robert Gower, long-serving MP for Gillingham in Kent and his wife Kate. Her father gave her a Spartan two-seater aeroplane with a Cirrus III engine as a 21st birthday present and she set up in business with Dorothy, initially running an airtaxi service in Kent. In 1932 she joined the Crimson Fleet Air Circus summer tour – six years later she published Women With Wings, her account of pre-war flying and air circus summers with Dorothy. In 1938 Pauline – the first woman to be awarded the Air Ministry’s

WE HAVE copies of Pauline Gower, Pioneering Leader of The Spitfire Women by Alison Hill to win. For your chance to own one, tell us: How many women pilots did Pauline Gower recruit to the women’s section of the ATA? Email your answer, marked Pauline Gower biography competition, to: competitions@ rafnews.co.uk or post it to: RAF News, Room 68, Lancaster Building, HQ Air Command, High Wycombe, HP14 4UE, to arrive by September 9.

Second-Class Navigator’s Licence two year earlier – was appointed Commissioner of the Civil Air Guard, a scheme to train a reserve of British pilots. On January 1, 1940, she was authorised to form the women’s section of the ATA and recruited the ‘First Eight’ pilots to much press attention. In June 1945, three months before the ATA was wound down that September, Pauline married Wg Cdr Bill Fahie. She became pregnant the following year but suffered poor health throughout her pregnancy and sadly died from heart failure after giving birth to twin sons Paul and Michael, who survived. Michael Fahie’s tribute to the mother he never knew, A Harvest of Memories: The Life of Pauline Gower MBE, was published in 1995.

lison Hill said: “Michael sent me bound copies of letters that formed his research from August 1992 to May 1994. What struck me

as I read the rich correspondence between long-lost family members and friends, and from fellow ATA pilots… was the enthusiasm, respect and warmth with which they all remembered Pauline.” During her time as Commandant of the women’s section of the ATA

Pauline recruited 164 female pilots. The book includes a chapter highlighting the successes of some contemporary women pilots, particularly members of the British Women Pilots’ Associations. Alison said: “Pauline would have been proud of them all.”