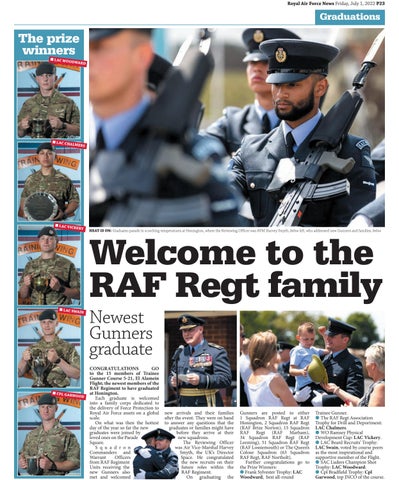 HEAT IS ON: Graduates parade in scorching temperatures at Honington, where the Reviewing Officer was AVM Harvey Smyth, below left, who addressed new Gunners and families, below

Welcome to the RAF Regt family Newest Gunners graduate CONGRATULATIONS GO to the 15 members of Trainee Gunner Course 5-21, El Alamein Flight; the newest members of the RAF Regiment to have graduated at Honington. Each graduate is welcomed into a family corps dedicated to the delivery of Force Protection to Royal Air Force assets on a global scale. On what was then the hottest day of the year so far the new graduates were joined by loved ones on the Parade Square. S q u a d r o n Commanders and Warrant Officers from RAF Regiment Units receiving the new Gunners also met and welcomed

new arrivals and their families after the event. They were on hand to answer any questions that the graduates or families might have before they arrive at their new squadrons. The Reviewing Officer was Air Vice-Marshal Harvey Smyth, the UK’s Director Space. He congratulated the new recruits on their future roles within the RAF Regiment. On graduating the