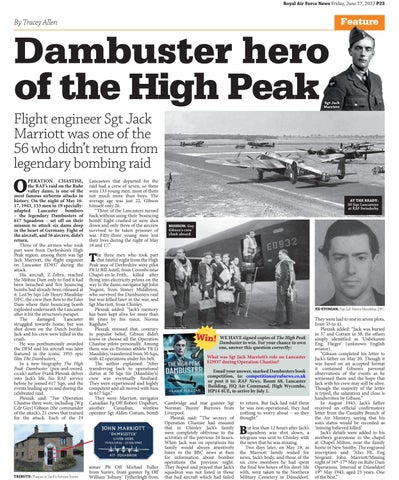 Dambuster hero of the High Peak

PERATION CHASTISE, the RAF’s raid on the Ruhr valley dams, is one of the most famous airborne attacks in history. On the night of May 1617, 1943, 133 men in 19 speciallyadapted Lancaster bombers – the legendary Dambusters of 617 Squadron – set off on their mission to attack six dams deep in the heart of Germany. Eight of the aircraft, and 56 aircrew, didn’t return. Three of the airmen who took part were from Derbyshire’s High Peak region; among them was Sgt Jack Marriott, the flight engineer on Lancaster ED937 during the attack. His aircraft, Z-Zebra, reached the Möhne Dam only to find it had been breached and five bouncing bombs had already been released at it. Led by Sqn Ldr Henry Maudslay DFC, the crew then flew to the Eder Dam where their bouncing bomb exploded underneath the Lancaster after it hit the structure’s parapet. The damaged Lancaster struggled towards home, but was shot down on the Dutch border. Jack and his crew were killed in the crash. He was posthumously awarded the DFM and his aircraft was later featured in the iconic 1955 epic film The Dambusters. In a new biography The High Peak Dambuster (pen-and-sword. co.uk) author Frank Pleszak delves into Jack’s life, his RAF service before he joined 617 Sqn, and the events leading up to and during the celebrated raid. Pleszak said: “For Operation Chastise there were, including [Wg Cdr Guy] Gibson (the commander of the attack), 21 crews that trained for the attack. Each of the 19

Lancasters that departed for the raid had a crew of seven, so there were 133 young men, most of them not much more than boys. The average age was just 22, Gibson himself only 26. “Three of the Lancasters turned back without using their ‘bouncing bomb’. Eight crashed or were shot down and only three of the aircrew survived to be taken prisoner of war. Fifty-three young men lost their lives during the night of May 16 and 17.”

AT THE READY: 50 Sqn Lancasters at RAF Swinderby

he three men who took part that fateful night from the High Peak area of Derbyshire were pilot Flt Lt Bill Astell, from Coombs near Chapel-en-le-Frith, killed after flying into electricity pylons on the way to the dams; navigator Sgt John Nugent, from Stoney Middleton, who survived the Dambusters raid but was killed later in the war, and Sgt Marriott, from Chinley. Pleszak added: “Jack’s memory has been kept alive for more than 80 years by his niece, Norma Bagshaw.” Pleszak stressed that, contrary to popular belief, Gibson didn’t know or choose all the Operation Chastise pilots personally. Among them was ex-Etonian athlete Flt Lt Maudsley, transferred from 50 Sqn, with 42 operations under his belt. The author explained: “After transferring back to operational duties at 50 Sqn his [Maudslay’s] crew was eventually finalised. They were experienced and highly competent and all moved with him to 617 Sqn.” They were: Marriott, navigator Canadian Fg Off Robert Urquhart, another Canadian, wireless operator Sgt Alden Cottam, bomb

WE HAVE signed copies of The High Peak Dambuster to win. For your chance to own one, answer this question correctly:

What was Sgt Jack Marriott’s role on Lancaster ED937 during Operation Chastise? Email your answer, marked Dambusters book competition, to: competitions@rafnews.co.uk or post it to: RAF News, Room 68, Lancaster Building, HQ Air Command, High Wycombe, HP14 4UE, to arrive by July 1. Cambridge and rear gunner Sgt Norman ‘Bunny’ Burrows from Liverpool. Pleszak said: “The secrecy of Operation Chastise had ensured that in Chinley Jack’s family were completely oblivious to the activities of the previous 24 hours. When Jack was on operations his family would always attentively listen to the BBC news at 8am for information about bomber operations the previous night. They hoped and prayed that Jack’s squadron was not listed in those that had aircraft which had failed

to return. But Jack had told them he was non-operational, they had nothing to worry about – so they thought.”

ut less than 12 hours after Jack’s squadron was shot down, a telegram was sent to Chinley with the news that he was missing. Two days later, on May 19, as the Marriott family waited for news, Jack’s body, and those of the six crew members he had spent the final few hours of his short life with, were taken to the Northern Military Cemetery in Düsseldorf.

They were laid to rest in seven plots, from 35 to 41. Pleszak added: “Jack was buried in 37 and Cottam in 38, the others simply identified as ‘Unbekannt Eng. Flieger’ (unknown English aviator). “Gibson completed his letter to Jack’s father on May 20. Though it was based on an accepted format it contained Gibson’s personal observations of the events as he witnessed them and the hope that Jack with his crew may still be alive. Though the majority of the letter is typed, the salutation and close is handwritten by Gibson.” In August 1943, Jack’s father received an official confirmatory letter from the Casualty Branch of the Air Ministry, saying that his son’s status would be recorded as ‘missing believed killed.’ Jack’s details were added to his mother’s gravestone in the chapel at Chapel Milton, near the family home in New Smithy. The engraved inscription said: “Also Flt. Eng Sergeant John Marriott/Missing night of 16th-17th May on Ruhr Dam Operations. Interred at Düsseldorf 19th May 1943, aged 23 years. One of the best.”