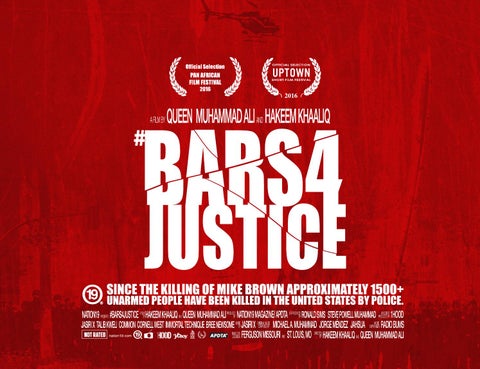 A Rapper gives up his freedom in Ferguson Missouri in order to fight for justice or else. Police killed at least 1,152 people in the United States from January 1 - December 15, 2015. Nearly one in four of these people was killed by one of Americaâ&#x20AC;&#x2122;s largest 60 city police departments.

41 of the 60 police departments disproportionately killed unarmed black people relative to the population of black people in their jurisdiction.

“This is about the tension in Ferguson...”

In order of appearance

On August 9th 2014 unarmed black teenager Michael Brown was killed by Ferguson Police officer Darren Wilson setting off a string of protest, rioting, and millions of dollars of property damage. Since that day over 1200 unarmed US citizens have been killed by Police. Bars4Justice was shot on location in St Louis and Ferguson, and follows Emcee / Community activist Jasiri X who was invited to perform at a benefit concert on August 9th 2015. On that night Jasiri shared the stage with Hip Hop heavy weights Talib Kweli, Immortal Technique, and Academy AwardÂŽ winner Common (Selma), grassroots activist Dr. Cornell West, and Bree Newsome for a night of Hip Hop unity, charity and non violence. During the concert everyone was shocked to hear that another black teen was shot by Ferguson police around the corner from where Mike Brown was killed exactly one year later. This sparked a chain of events that led Jasiri to give up everything in order to fight for Justice or Else.

This film goes way beyond news media cameras and documents the truth of the real tensions between the community and law enforcement. Absolutely nothing in this film is scripted or was expected to happen. #Bars4Justice film is ÂŠ2015 - 4 eva by Nation19 Magazine a Mobile Regime Brand.

From living on remote islands (Aunu’u & Tutuila) in the South Pacific in order to research Anthropophagy (study of Cannibalism) to working with poor Mayan coffee farmers to producing the untold history of blacks in Mexico, Queen Muhammad Ali and Hakeem Khaaliq are pioneering a new style of documentary filmmaking, using immersive storytelling to raise awareness and inspire action around pressing global issues. So far, their work has raised awareness about Hip Hop advocacy and historic inaccuracies affecting indigenous and black communities. They have a unique method of tackling these issues with a fresh new youthful approach.

Made in Amerikkka Documentary

Queen Muhammad Ali DIRECTOR , EDITOR, TELEVISION PRODUCER, WRITER, ACTIVIST, MODEL, DESIGNER, PUBLIC SPEAKER. Before she began producing films she was a elementary school teacher in Southern California. She is also the Founder and Publisher of Nation19 Magazine. Queen’s name is not by accident. Her Great Grandfather is Paramount Chief (King) Tuli Le’iato of American Samoa who’s letters to President Kennedy are on display in the John F. Kennedy Presidential Library and Museum.

1. Is it true that #Bars4Justice started as an International Rap contest?

Yes, the contest was created by the films Co-Director Queen Muhammad Ali as a quick idea she pitched to Jasiri X while he was in Phoenix speaking at the Net Roots conference. After Its launch the contest gained quick notoriety and we received submissions from the US, Belize, Africa, American Samoa and Saudi Arabia. The contest challenged rappers to only use 4bars or 15 seconds to rap about Justice.

2. What was the single hardest thing you experienced while in Ferguson St Louis? We couldn’t find anything to eat! We never had dinner, lunch, or breakfast and hopped back on a plane the next day with our stomachs growling. lol Also the tear gas in the air made us nauseous.

3. Why did you make this film?

We were only there to film the concert. We didn’t know we were making a film. After returning from St Louis we realized

this footage could be organized into a film and used to show how important it is for Hip Hop artist to use thier talent and influence for advocacy.

5. Describe this style of film making

4. Why is there no hip hop music in this hip hop film?

6. What does bars4 justice mean?

We wanted to place emphasis on the lyrics or spoken word. Jasiri is a very great speaker and we wanted people watching the film to hear all the emotions from happiness to sadness to humor. Drums would have changed the dynamic of the underscore.

If Jdilla was a documentary film maker…this would be his style. We use static under the voice overs and we keep the shooting raw. The most popular time signature in music is the 4/4 measure and 4 bars is usually 1/4th of a rap verse (16 bars). Instagram allows you to say about 4 bars in a video post.

7. Is Queen related to Muhammad Ali the Boxer? No more questions. 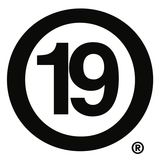