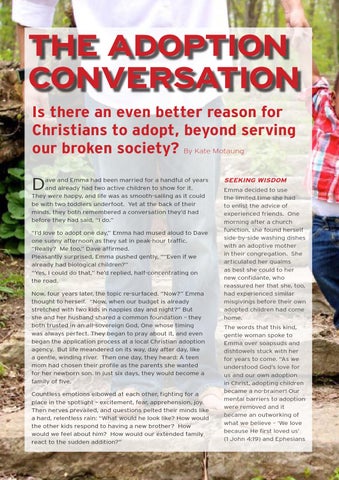 THE ADOPTION CONVERSATION Is there an even better reason for Christians to adopt, beyond serving our broken society? By Kate Motaung

ave and Emma had been married for a handful of years and already had two active children to show for it. They were happy, and life was as smooth-sailing as it could be with two toddlers underfoot. Yet at the back of their minds, they both remembered a conversation they’d had before they had said, “I do.” “I’d love to adopt one day,” Emma had mused aloud to Dave one sunny afternoon as they sat in peak-hour traffic. “Really? Me too,” Dave affirmed. Pleasantly surprised, Emma pushed gently, ““Even if we already had biological children?” “Yes, I could do that,” he’d replied, half-concentrating on the road. Now, four years later, the topic re-surfaced. “Now?” Emma thought to herself. “Now, when our budget is already stretched with two kids in nappies day and night?” But she and her husband shared a common foundation – they both trusted in an all-sovereign God, One whose timing was always perfect. They began to pray about it, and even began the application process at a local Christian adoption agency. But life meandered on its way, day after day, like a gentle, winding river. Then one day, they heard: A teen mom had chosen their profile as the parents she wanted for her newborn son. In just six days, they would become a family of five. Countless emotions elbowed at each other, fighting for a place in the spotlight – excitement, fear, apprehension, joy. Then nerves prevailed, and questions pelted their minds like a hard, relentless rain: “What would he look like? How would the other kids respond to having a new brother? How would we feel about him? How would our extended family react to the sudden addition?”

SEEKING WISDOM Emma decided to use the limited time she had to enlist the advice of experienced friends. One morning after a church function, she found herself side-by-side washing dishes with an adoptive mother in their congregation. She articulated her qualms as best she could to her new confidante, who reassured her that she, too, had experienced similar misgivings before their own adopted children had come home. The words that this kind, gentle woman spoke to Emma over soapsuds and dishtowels stuck with her for years to come. “As we understood God’s love for us and our own adoption in Christ, adopting children became a no-brainer! Our mental barriers to adoption were removed and it became an outworking of what we believe – ‘We love because He first loved us’ (1 John 4:19) and Ephesians

Welcome to the third edition of Radiant Magazine, a women's lifestyle mag written from a Christian world view.