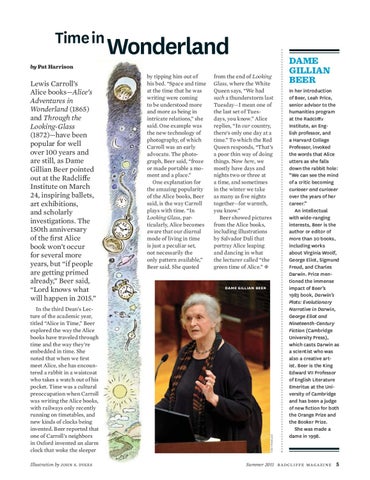 In the third Dean’s Lecture of the academic year, titled “Alice in Time,” Beer explored the way the Alice books have traveled through time and the way they’re embedded in time. She noted that when we ﬁ ﬁrst meet Alice, she has encountered a rabbit in a waistcoat who takes a watch out of his pocket. Time was a cultural preoccupation when Carroll was writing the Alice books, with railways only recently running on timetables, and new kinds of clocks being invented. Beer reported that one of Carroll’s neighbors in Oxford invented an alarm clock that woke the sleeper Illustration by john s. dykes

by tipping him out of his bed. “Space and time at the time that he was writing were coming to be understood more and more as being in intricate relations,” she said. One example was the new technology of photography, of which Carroll was an early advocate. The photograph, Beer said, “froze or made portable a moment and a place.” One explanation for the amazing popularity of the Alice books, Beer said, is the way Carroll plays with time. “In Looking Glass, particularly, Alice becomes aware that our diurnal mode of living in time is just a peculiar set, not necessarily the only pattern available,” Beer said. She quoted

from the end of Looking Glass, where the White Queen says, “We had such a thunderstorm last Tuesday—I mean one of the last set of Tuesdays, you know.” Alice replies, “In our country, there’s only one day at a time.” To which the Red Queen responds, “That’s a poor thin way of doing things. Now here, we mostly have days and nights two or three at a time, and sometimes in the winter we take as many as ﬁve nights together—for warmth, you know.” Beer showed pictures from the Alice books, including illustrations by Salvador Dalí that portray Alice leaping and dancing in what the lecturer called “the green time of Alice.” ƒ dame gillian beer

Lewis Carroll’s Alice books—Alice’s — Adventures in d (1865) Wonderland and Through the Looking-Glass (1872)—have been popular for well over 100 years and are still, as Dame Gillian Beer pointed out at the Radcliff ffe Institute on March 24, inspiring ballets, art exhibitions, and scholarly investigations. The 150th anniversary of the ﬁrst Alice book won’t occur for several more years, but “if people are getting primed already,” Beer said, “Lord knows what will happen in 2015.”

DAME GILLIAN BEER In her introduction of Beer, Leah Price, senior advisor to the humanities program at the Radcliﬀ ﬀe Institute, an English professor, and a Harvard College Professor, invoked the words that Alice utters as she falls down the rabbit hole: “We can see the mind of a critic becoming curioser and curioser over the years of her career.” An intellectual with wide-ranging interests, Beer is the author or editor of more than 20 books, including works about Virginia Woolf, George Eliot, Sigmund Freud, and Charles Darwin. Price mentioned the immense impact of Beer’s 1983 book, Darwin’s Plots: Evolutionary Narrative in Darwin, George Eliot and Nineteenth-Century Fiction (Cambridge University Press), which casts Darwin as a scientist who was also a creative artist. Beer is the King Edward VII Professor of English Literature Emeritus at the University of Cambridge and has been a judge of new ﬁction for both the Orange Prize and the Booker Prize. She was made a dame in 1998.

The Radcliffe Institute for Advanced Study at Harvard University is a scholarly community where individuals pursue advanced work across a wide range of academic disciplines, professions, and creative arts. Within this broad purpose, the Radcliffe Institute sustains a continuing commitment to the study of women, gender, and society. 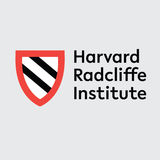