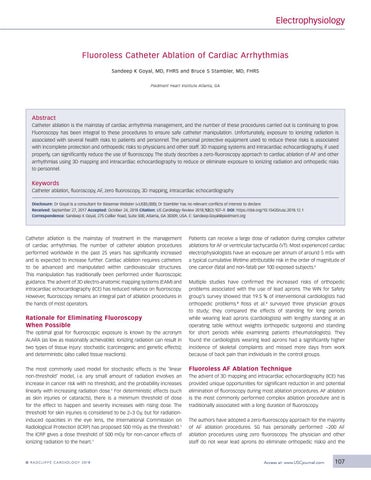 Abstract Catheter ablation is the mainstay of cardiac arrhythmia management, and the number of these procedures carried out is continuing to grow. Fluoroscopy has been integral to these procedures to ensure safe catheter manipulation. Unfortunately, exposure to ionizing radiation is associated with several health risks to patients and personnel. The personal protective equipment used to reduce these risks is associated with incomplete protection and orthopedic risks to physicians and other staff. 3D mapping systems and intracardiac echocardiography, if used properly, can significantly reduce the use of fluoroscopy. The study describes a zero-fluoroscopy approach to cardiac ablation of AF and other arrhythmias using 3D mapping and intracardiac echocardiography to reduce or eliminate exposure to ionizing radiation and orthopedic risks to personnel.

Catheter ablation is the mainstay of treatment in the management of cardiac arrhythmias. The number of catheter ablation procedures performed worldwide in the past 25 years has significantly increased and is expected to increase further. Cardiac ablation requires catheters to be advanced and manipulated within cardiovascular structures. This manipulation has traditionally been performed under fluoroscopic guidance. The advent of 3D electro-anatomic mapping systems (EAM) and intracardiac echocardiography (ICE) has reduced reliance on fluoroscopy. However, fluoroscopy remains an integral part of ablation procedures in the hands of most operators.

Rationale for Eliminating Fluoroscopy When Possible The optimal goal for fluoroscopic exposure is known by the acronym ALARA (as low as reasonably achievable). Ionizing radiation can result in two types of tissue injury: stochastic (carcinogenic and genetic effects); and deterministic (also called tissue reactions). The most commonly used model for stochastic effects is the ‘linear non-threshold’ model, i.e. any small amount of radiation involves an increase in cancer risk with no threshold, and the probability increases linearly with increasing radiation dose.1 For deterministic effects (such as skin injuries or cataracts), there is a minimum threshold of dose for the effect to happen and severity increases with rising dose. The threshold for skin injuries is considered to be 2–3 Gy, but for radiationinduced opacities in the eye lens, the International Commission on Radiological Protection (ICRP) has proposed 500 mGy as the threshold.1 The ICRP gives a dose threshold of 500 mGy for non-cancer effects of ionizing radiation to the heart.1

Patients can receive a large dose of radiation during complex catheter ablations for AF or ventricular tachycardia (VT). Most experienced cardiac electrophysiologists have an exposure per annum of around 5 mSv with a typical cumulative lifetime attributable risk in the order of magnitude of one cancer (fatal and non-fatal) per 100 exposed subjects.2 Multiple studies have confirmed the increased risks of orthopedic problems associated with the use of lead aprons. The WIN for Safety group’s survey showed that 19.5  % of interventional cardiologists had orthopedic problems.3 Ross et al.4  surveyed three physician groups to study; they compared the effects of standing for long periods while wearing lead aprons (cardiologists) with lengthy standing at an operating table without weights (orthopedic surgeons) and standing for short periods while examining patients (rheumatologists). They found the cardiologists wearing lead aprons had a significantly higher incidence of skeletal complaints and missed more days from work because of back pain than individuals in the control groups.