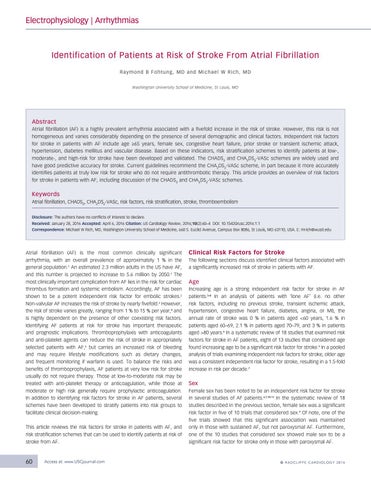 Abstract Atrial fibrillation (AF) is a highly prevalent arrhythmia associated with a fivefold increase in the risk of stroke. However, this risk is not homogeneous and varies considerably depending on the presence of several demographic and clinical factors. Independent risk factors for stroke in patients with AF include age ≥65 years, female sex, congestive heart failure, prior stroke or transient ischemic attack, hypertension, diabetes mellitus and vascular disease. Based on these indicators, risk stratification schemes to identify patients at low-, moderate-, and high-risk for stroke have been developed and validated. The CHADS2 and CHA2DS2-VASc schemes are widely used and have good predictive accuracy for stroke. Current guidelines recommend the CHA2DS2-VASc scheme, in part because it more accurately identifies patients at truly low risk for stroke who do not require antithrombotic therapy. This article provides an overview of risk factors for stroke in patients with AF, including discussion of the CHADS2 and CHA2DS2-VASc schemes.

Atrial fibrillation (AF) is the most common clinically significant arrhythmia, with an overall prevalence of approximately 1 % in the general population.1 An estimated 2.3 million adults in the US have AF, and this number is projected to increase to 5.6 million by 2050.1 The most clinically important complication from AF lies in the risk for cardiac thrombus formation and systemic embolism. Accordingly, AF has been shown to be a potent independent risk factor for embolic strokes.2 Non-valvular AF increases the risk of stroke by nearly fivefold.2 However, the risk of stroke varies greatly, ranging from 1 % to 15 % per year,3 and is highly dependent on the presence of other coexisting risk factors. Identifying AF patients at risk for stroke has important therapeutic and prognostic implications. Thromboprophylaxis with anticoagulants and anti-platelet agents can reduce the risk of stroke in appropriately selected patients with AF,4 but carries an increased risk of bleeding and may require lifestyle modifications such as dietary changes, and frequent monitoring if warfarin is used. To balance the risks and benefits of thromboprophylaxis, AF patients at very low risk for stroke usually do not require therapy. Those at low-to-moderate risk may be treated with anti-platelet therapy or anticoagulation, while those at moderate or high risk generally require prophylactic anticoagulation. In addition to identifying risk factors for stroke in AF patients, several schemes have been developed to stratify patients into risk groups to facilitate clinical decision-making. This article reviews the risk factors for stroke in patients with AF, and risk stratification schemes that can be used to identify patients at risk of stroke from AF.

Sex Female sex has been noted to be an independent risk factor for stroke in several studies of AF patients.6,7,10–12 In the systematic review of 18 studies described in the previous section, female sex was a significant risk factor in five of 10 trials that considered sex.9 Of note, one of the five trials showed that this significant association was maintained only in those with sustained AF, but not paroxysmal AF. Furthermore, one of the 10 studies that considered sex showed male sex to be a significant risk factor for stroke only in those with paroxysmal AF.