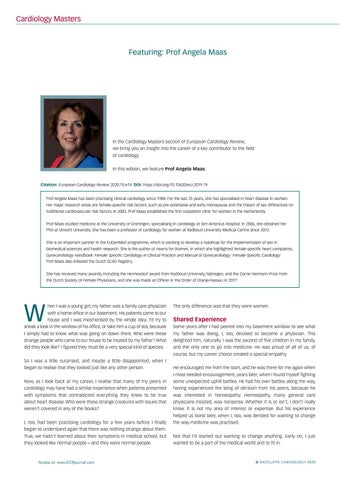 In the Cardiology Masters section of European Cardiology Review, we bring you an insight into the career of a key contributor to the field of cardiology. In this edition, we feature Prof Angela Maas. Citation: European Cardiology Review 2020;15:e14. DOI: https://doi.org/10.15420/ecr.2019.19 Prof Angela Maas has been practising clinical cardiology since 1988. For the last 25 years, she has specialised in heart disease in women. Her major research areas are female-specific risk factors, such as pre-eclampsia and early menopause and the impact of sex differences on traditional cardiovascular risk factors. In 2003, Prof Maas established the first outpatient clinic for women in the Netherlands. Prof Maas studied medicine at the University of Groningen, specialising in cardiology at Sint Antonius Hospital. In 2006, she obtained her PhD at Utrecht University. She has been a professor of cardiology for women at Radboud University Medical Centre since 2012. She is an important partner in the EUGenMed programme, which is working to develop a roadmap for the implementation of sex in biomedical sciences and health research. She is the author of Hearts for Women, in which she highlighted female-specific heart complaints, Gynecardiology Handbook: Female Specific Cardiology in Clinical Practice and Manual of Gynecardiology: Female-Specific Cardiology. Prof Maas also initiated the Dutch SCAD Registry. She has received many awards, including the Hermesdorf award from Radboud University, Nijmegen, and the Corrie Hermann Prize from the Dutch Society of Female Physicians, and she was made an Officer in the Order of Oranje-Nassau in 2017.

hen I was a young girl, my father was a family care physician with a home office in our basement. His patients came to our house and I was mesmerised by the whole idea. I’d try to sneak a look in the window of his office, or take him a cup of tea, because I simply had to know what was going on down there. Who were these strange people who came to our house to be treated by my father? What did they look like? I figured they must be a very special kind of species. So I was a little surprised, and maybe a little disappointed, when I began to realise that they looked just like any other person. Now, as I look back at my career, I realise that many of my peers in cardiology may have had a similar experience when patients presented with symptoms that contradicted everything they knew to be true about heart disease. Who were these strange creatures with issues that weren’t covered in any of the books? I, too, had been practising cardiology for a few years before I finally began to understand again that there was nothing strange about them. True, we hadn’t learned about their symptoms in medical school, but they looked like normal people – and they were normal people.

The only difference was that they were women.

Shared Experience Some years after I had peered into my basement window to see what my father was doing, I, too, decided to become a physician. This delighted him, naturally. I was the second of five children in my family, and the only one to go into medicine. He was proud of all of us, of course, but my career choice created a special empathy. He encouraged me from the start, and he was there for me again when I most needed encouragement, years later, when I found myself fighting some unexpected uphill battles. He had his own battles along the way, having experienced the sting of derision from his peers, because he was interested in homeopathy. Homeopathy, many general care physicians insisted, was nonsense. Whether it is or isn’t, I don’t really know. It is not my area of interest or expertise. But his experience helped us bond later, when I, too, was derided for wanting to change the way medicine was practised. Not that I’d started out wanting to change anything. Early on, I just wanted to be a part of the medical world and to fit in.