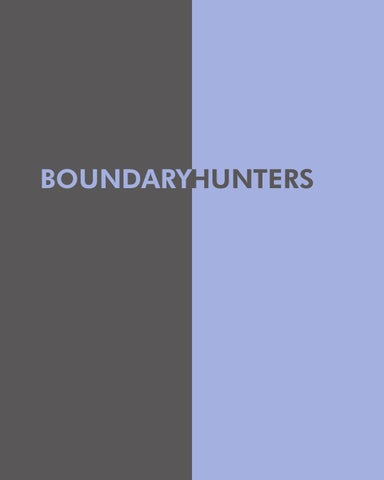 The Fosdick-Nelson Gallery, housed in the School of Art and Design at Alfred University, is pleased to present Boundary Hunters showcasing the work of seven contemporary abstract painters representing Arkansas, Tennessee, and the New York metropolitan area. The approach to abstraction in Boundary Hunters is diverse, ranging from flat geometric form to illusionary perspective, from complex layered patterns to atmospheric space. The methodology employed in the application of paint varies in scope from a calculated build up of multiple thin layers to large strokes where the artist has intentionally over filled the brush allowing paint to ooze down the canvas. Thirty medium-to-large-scale works make up this exciting exhibition. The caliber of work is sure to inspire students and faculty from the School of Art and Design and the community at large. I would like to first thank the artists for loaning their work to the gallery and Eric Sutphin for writing the catalog essay. Special thanks goes to Rachael Wren and Matthew Farina for proposing and organizing the show; and to Stephanie McMahon, Assistant Professor of Painting and Drawing, for making the initial contact. I would also like to thank Dean Bellavance and the Gallery Committee for their continued support in helping to keep Fosdick-Nelson programming strong. And last, but not least, I would like to thank my incredible staff: Chris Taylor, Gallery Preparator, Taylor Roberge, Graphic Designer, and my crew of twelve student assistants â&amp;#x20AC;&amp;#x201C; all outstanding, gifted individuals who work tirelessly behind the scenes to make our exhibitions possible. Everyone who participated in the orchestration of Boundary Hunters was integral to its great success. Sharon McConnell Director, Fosdick-Nelson Gallery School of Art and Design NYSCC at Alfred University

BOUNDARY HUNTERS: FOUR SIDES TO EVERY STORY Physical or topographical boundaries keep us contained in regions or municipalities. As socialconstructs, boundaries dictate how much we offer of ourselves and, likewise, what we withhold. The seven painters included in Boundary Hunters each confront or defy the edges and limitations imposed by the structural elements of a painting, namely its borders. Inspiration is messy. The painters exhibited here all synthesize and transform that dreamy aether into concrete realities with their materials. Shown together, their paintings converse with one another. At first we may notice disharmonies. Sometimes a painting puts up a fence. But then, a kind of synergistic sharing happens as one work invites the next to cross its edges and chat. Of the painters represented in Boundary Hunters, Laurel Sucsy is the most concerned with objectness in her abstractions. Her paintings contain amalgamations of rock-like shapes suggesting geological processes. Lapis lazuli stands out in craggy strata of earth tones and the borders of the canvas frame off cross sections of sensual sediment. Her quiet and sometimes solemn paintings call up the proto-abstract expressionist vocabulary of 1940’s painters like Gertrude Barrer and Rosemarie Beck. In Sucsy’s work, clusters and chunks of paint crystallize into polychrome monoliths that seem to hover in shallow space. Forgoing any illusionism, Karen Schifano’s paintings are restrained, employing two, three, maybe four colors. Her paintings consist of parallels and horizontals, with the occasional diagonal passage painted in flatly applied color. In some of her works, Schifano draws with tape onto the floor, creating a rectilinear plane that conjoins the painting’s surface with the viewer’s space. The addition of the third dimension complicates the way in which we read these paintings. They become something else. There is suddenly an impulse to participate in the work but the rigidity of the structure keeps us at bay, pondering the edges and trying to find a way through the surface. Schifano hints at invitation but we are never totally allowed in and are sometimes left to linger. While Schifano’s paintings are cool and quiet, Amy Feldman’s canvases feature pseudogeometries that seem too big for their housing. They press the sides of the canvas and elbow their way into the viewer’s space. The tension between cool oblivion and anxious self-awareness animates Feldman’s work. The viewer’s attention is turned inward at the greyish forms, wobbly edges and lopsided geometries. A series of stacked triangles could function as a stand-in for a triad of gawky adolescents with their hands stuffed in their pockets gazing at their feet. While Feldman situates her forms within the limited confines of the canvas, Rachael Wren’s paintings suggest expanding environments. They’re built up of tiny shapes within gridded structures which when strung together hint at infinite space. Wren employs her vitamin-like brushstrokes as individual units similar to pixels. These modules then cluster together within segments of a vast grid to form unified images. Wren’s paintings are sometimes austere, other

times ethereal. Ovular forms materialize as either convex pillars or as concave recesses. Wren uses restraint and limitation in her process which paradoxically offers up a complex and rich visual experience. Like Wren, Matthew Farina’s paintings are immersive. Farina uses a distinct vocabulary of marks that he choreographs across the picture plane. A few of his favorite motifs are tendrils, nodes and lozenge shapes of paint which are placed, scattered or thrown across the canvas, each interlocking and tickling one another. Sometimes a broad meaty brushstroke interrupts a polite network of aqua, violet or green so the eye scuttles away, roving over the painting’s lush surface. In Farina’s work, the edges of the canvas disappear and the viewer engages in the action of the surface. Julian Jackson’s paintings employ methodically considered rectilinear forms hovering in reverence to the rectangle. They reflect light and air. Floaty and diffuse rhomboids suggest faded foreign places seen through palpable atmosphere. Jackson, like Wren, applies an organizational framework that supports the slow additive application of luminous glazes. The relationship between his painted forms and the edges of the canvas illustrates Jackson’s idea that, to paraphrase, “humans are vertical beings with a columnar structure. Consciousness is its uppermost apex. Our perception is dictated by the horizon and the square regulates our viewing.” In Jackson’s work the painting becomes a place for projection. Donnie Copeland incorporates collage elements into his work which places him outside the traditional paint-on-canvas approach that the other artists in this exhibition adhere to. Bent curvilinear bands are painted on paper and then affixed to the canvas which in turn serves as a platform for the abstractions. There is a definitive point of distinction between the paper, paint and canvas. Copeland’s paintings suggest cross-sections of ambiguous natural forms or, like Laurel Sucsy’s paintings, geological structures and sedimentary material. Through his investigation of charcoal, acrylic and paper, Copeland’s lyrical strata emerge as both rich and detached. The worked-over surface of the collage elements contradicts the austerity of the pristine canvas. In this way, his canvases functions quite differently than his counterparts’. In the other painters’ pieces, we take the canvas or support as a given, while Copeland renders it as a variable. When a painter chooses a square or rectangular surface he or she is opting for a concrete limitation. Each artist presented in Boundary Hunters deals with this restriction through his or her ongoing investigations into the material reality of painting. Each painter navigates the finite surface of the canvas or panel and through a kind of alchemy expands its limited confines. The surface provides the physical parameters within which the painting will exist and the painter creates an image that will, in the end, respect, ignore or mock its own boundaries. Eric Sutphin, 2012 Eric Sutphin is a writer and painter living in New York City.

Donnie Copeland works primarily with painted paper to produce non-objective, collaged canvases that emphasize pattern, texture, color and mark. The works are a synthesis and response to the visuality of subjects such as planted fields along the Mississippi and the art of distant peoples and cultures. His work has been included in exhibits at the Kansas City Artistâ&amp;#x20AC;&amp;#x2122;s Coalition and the Arkansas Arts Center and in solo and group exhibits in Texas, Louisiana, Missouri, North Carolina, South Carolina, and Minnesota. He lives with his family in Arkadelphia, Arkansas and teaches drawing and painting at Ouachita Baptist University.

Matthew Farina is a Brooklyn-based painter. His work is created through a memory-driven embrace of atmosphere, color, light and geometry. Through this process, his paintings become landscape-inspired, chromatically-charged spaces that articulate a personal syntax of form and shape. Farina received a BFA from the University of Pennsylvania and a four-year studio certificate in printmaking from the Pennsylvania Academy of the Fine Arts. Farina has also worked with the Yale Repertory Theater, the Yale University Art Gallery, Franklin Parrasch Gallery and the School of Visual Arts.

Amy Feldman lives and works in Brooklyn, NY. Feldman received a BFA from the Rhode Island School of Design and an MFA from Rutgers University. She is the recipient of the Robert Motherwell Fellowship at The MacDowell Colony, the New Jersey State Council on the Arts Grant and has also received fellowships from Virginia Commonwealth University and the Fountainhead Foundation, The Henry Street Settlement at the Abrons Art Center, Yaddo, the Marie Walsh Sharpe Foundation, and the Skowhegan School of Painting and Sculpture. Her work has been featured in The New York Times, Time Out New York, the Brooklyn Rail, Hyperallergic, NY Arts Magazine, Art in America, The Art Economist, Saatchi Online Magazine, and the Huffington Post.

Karen Schifano is a painter/sculptor based in Williamsburg, Brooklyn. As an abstract artist, she explores issues of line and space through painting and tape installations, drawing inspiration from the surrounding urban landscape. She received a BA in Art History from Swarthmore College, an MFA in Painting from Hunter College, and received fellowships from the MacDowell Colony and the Fine Arts Work Center in Provincetown. Recent selected exhibition venues include Sydney Non Objective Contemporary Art Projects (Australia), ParisConcret (Paris) and Allegra La Viola, the McKenzie Gallery, and PS1/MoMA (New York City). Karen has also been employed as a painting restorer at Simon Parkes Art Conservation for over twenty-five years.

Laurel Sucsy received a BA from Bowdoin College in 1998 and an MFA from Tyler School of Art in 2002. She has exhibited her work in numerous group shows throughout the U.S. and has had solo exhibitions at John Davis Gallery, Hudson, NY and Clough-Hanson Gallery, Memphis, TN. She has attended residencies at the Vermont Studio Center, The Virginia Center for Creative Arts and The Ragdale Foundation. Sucsy is an assistant professor at Rhodes College. She lives in Quogue, NY and Memphis, TN.

Rachael Wren received a BA from the University of Pennsylvania and an MFA from the University of Washington. Her work has been exhibited in shows at Jeff Bailey Gallery, Geoffrey Young Gallery, The Painting Center, the Weatherspoon Art Museum, and the Kleinert/James Center for the Arts, among others. Rachael is the recipient of the Julius Hallgarten Prize from the National Academy Museum and an Aljira Fellowship. She has been awarded residencies at the Saltonstall Foundation, the Byrdcliffe Art Colony, Vermont Studio Center, the Anderson Center for Interdisciplinary Studies, and the Artist House at St. Maryâ&amp;#x20AC;&amp;#x2122;s College of Maryland.