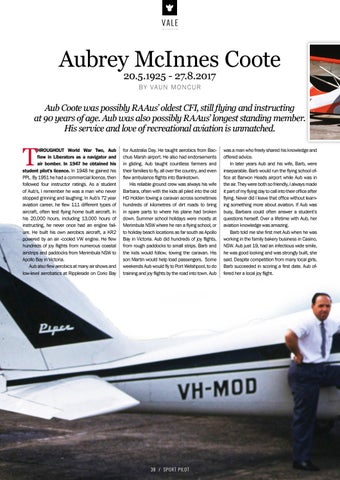 HROUGHOUT World War Two, Aub flew in Liberators as a navigator and air bomber. In 1947 he obtained his student pilot’s licence. In 1948 he gained his PPL. By 1951 he had a commercial licence, then followed four instructor ratings. As a student of Aub’s, I remember he was a man who never stopped grinning and laughing. In Aub’s 72 year aviation career, he flew 111 different types of aircraft, often test flying home built aircraft. In his 20,000 hours, including 13,000 hours of instructing, he never once had an engine failure. He built his own aerobics aircraft, a KR2 powered by an air -cooled VW engine. He flew hundreds of joy flights from numerous coastal airstrips and paddocks from Merimbula NSW to Apollo Bay in Victoria. Aub also flew aerobics at many air shows and low-level aerobatics at Rippleside on Corio Bay

for Australia Day. He taught aerobics from Bacchus Marsh airport. He also had endorsements in gliding. Aub taught countless farmers and their families to fly, all over the country, and even flew ambulance flights into Bankstown. His reliable ground crew was always his wife Barbara, often with the kids all piled into the old HD Holden towing a caravan across sometimes hundreds of kilometres of dirt roads to bring in spare parts to where his plane had broken down. Summer school holidays were mostly at Merimbula NSW where he ran a flying school, or to holiday beach locations as far south as Apollo Bay in Victoria. Aub did hundreds of joy flights, from rough paddocks to small strips. Barb and the kids would follow, towing the caravan. His son Martin would help load passengers. Some weekends Aub would fly to Port Welshpool, to do training and joy flights by the road into town. Aub

was a man who freely shared his knowledge and offered advice. In later years Aub and his wife, Barb, were inseparable. Barb would run the flying school office at Barwon Heads airport while Aub was in the air. They were both so friendly, I always made it part of my flying day to call into their office after flying. Never did I leave that office without learning something more about aviation. If Aub was busy, Barbara could often answer a student’s questions herself. Over a lifetime with Aub, her aviation knowledge was amazing. Barb told me she first met Aub when he was working in the family bakery business in Casino, NSW. Aub just 19, had an infectious wide smile, he was good looking and was strongly built, she said. Despite competition from many local girls, Barb succeeded in scoring a first date. Aub offered her a local joy flight. 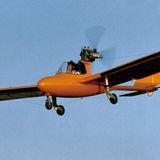