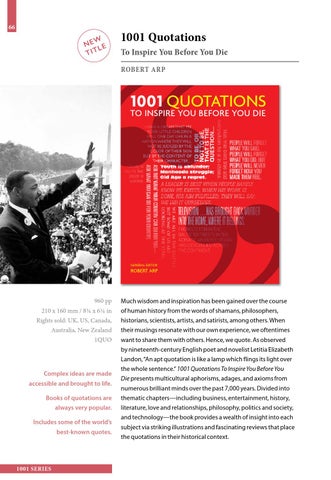 1001 Quotations To Inspire You Before You Die robert arp

TO INSPIRE YOU BEFORE YOU DIE

he question: the real question is

s and analyzes them. It covers the

m Confucius—whose “I hear and and I understand.” encapsulates

and “unknown unknowns,” which

estions of cognition and risk. This

TO INSPIRE YOU BEFORE YOU DIE

1001 Quotations to Inspire You B

(although there are plenty of th

pause and reflect on a range of

Each quotation is accompanied

where required, a snappy acco

meaning, and the historical con itwas first uttered or written.

Some famous quotations are st

what was said, but who said it,

that is more important. Many o

interpretation. What, for examp when he wrote “If God did not

own atheism (unlikely, given th

lived) or making a more subtle difficulty of apprehending the

“dictatorship of the proletariat

ambiguous, or was it merely an

of words that was open to misi

and a host of other such questi

reader from the source materia

discussions of its wider signific

We all love quotations—we use

more than the words themselves.

our points, to plead our cases,

opinions, as well as to honor, g

incite, besmirch, bewitch, and b

Much wisdom and inspiration has been gained over the course of human history from the words of shamans, philosophers, historians, scientists, artists, and satirists, among others. When their musings resonate with our own experience, we oftentimes want to share them with others. Hence, we quote. As observed by nineteenth-century English poet and novelist Letitia Elizabeth Landon, “An apt quotation is like a lamp which flings its light over

Complex ideas are made accessible and brought to life. Books of quotations are always very popular. Includes some of the world’s best-known quotes.

the whole sentence.“ 1001 Quotations To Inspire You Before You Die presents multicultural aphorisms, adages, and axioms from numerous brilliant minds over the past 7,000 years. Divided into thematic chapters—including business, entertainment, history, literature, love and relationships, philosophy, politics and society, and technology—the book provides a wealth of insight into each subject via striking illustrations and fascinating reviews that place the quotations in their historical context. 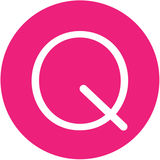