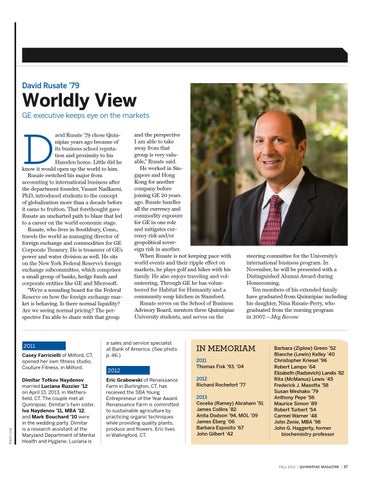 avid Rusate ’79 chose Quinnipiac years ago because of its business school reputation and proximity to his Hamden home. Little did he know it would open up the world to him. Rusate switched his major from accounting to international business after the department founder, Vasant Nadkarni, PhD, introduced students to the concept of globalization more than a decade before it came to fruition. That forethought gave Rusate an uncharted path to blaze that led to a career on the world economic stage. Rusate, who lives in Southbury, Conn., travels the world as managing director of foreign exchange and commodities for GE Corporate Treasury. He is treasurer of GE’s power and water division as well. He sits on the New York Federal Reserve’s foreign exchange subcommittee, which comprises a small group of banks, hedge funds and corporate entities like GE and Microsoft. “We’re a sounding board for the Federal Reserve on how the foreign exchange market is behaving. Is there normal liquidity? Are we seeing normal pricing? The perspective I’m able to share with that group

Casey Farricielli of Milford, CT, opened her own fitness studio, Couture Fitness, in Milford. Dimitar Totkov Naydenov married Luciana Ruzzier ’12 on April 13, 2013, in Wethersfield, CT. The couple met at Quinnipiac. Dimitar’s twin sister, Iva Naydenov ’11, MBA ’12, and Mark Bouchard ’10 were in the wedding party. Dimitar is a research assistant at the Maryland Department of Mental Health and Hygiene. Luciana is

and the perspective I am able to take away from that group is very valuable,” Rusate said. He worked in Singapore and Hong Kong for another company before joining GE 20 years ago. Rusate handles all the currency and commodity exposure for GE in one role and mitigates currency risk and/or geopolitical sovereign risk in another. When Rusate is not keeping pace with world events and their ripple effect on markets, he plays golf and hikes with his family. He also enjoys traveling and volunteering. Through GE he has volunteered for Habitat for Humanity and a community soup kitchen in Stamford. Rusate serves on the School of Business Advisory Board, mentors three Quinnipiac University students, and serves on the

a sales and service specialist at Bank of America. (See photo p. 46.)

steering committee for the University’s international business program. In November, he will be presented with a Distinguished Alumni Award during Homecoming. Ten members of his extended family have graduated from Quinnipiac including his daughter, Nina Rusate-Perry, who graduated from the nursing program in 2007.—Meg Barone

The Fall 2013 issue of the Quinnipiac Magazine. A magazine produced three times a year by Quinnipiac University for alumni, parents and friends of the University. 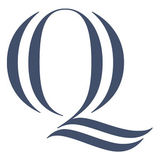