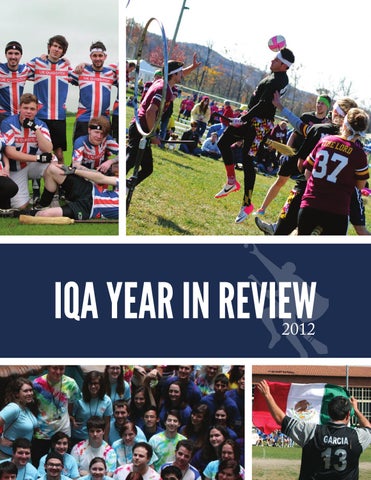 This year marked a major restructuring period for the IQA, as well as an explosion of new events, new communities, and greater league professionalism and legitimacy around the world.

new IQA-sponsored events: QuidCon, the first-ever quidditch convention, and regional championships: six in the US, one in Canada, one in France, and one in Australia-tournaments that, for the first time, were qualifiers for World Cup.

penpal program partnerships between teams around the world in the programâ&#x20AC;&#x2122;s first year.

At the starting line at the European Regionals.

The Three ‘C’s The IQA’s mission is to govern and promote the sport of quidditch and inspire young people to lead physically active and socially engaged lives. The IQA fulfills this mission through a holistic policy called “the Three C’s.” These represent the three pillars of the IQA’s work: Competition, Community, and Creativity. In 2012 the IQA made great strides in all three areas. 2

Competition In 2012, for the first time, all official teams were required to play at least five games during the regular season. Regional championship tournaments became qualifiers for the World Cup, and every official game was officiated by a certified head referee paid $12 per game-making head referee the first paid position in the IQA.

Regional Championships The IQA partnered with OAN Sports Marketing to solicit bids from cities to host regional championships. The IQA received bids from cities that included in-kind donations of services and venues, along with cash sponsorships in some cases. The IQA hosted nine regional championships in 2012, five of which had significant city support. Regionals took place in Rhode Island, North Carolina, Texas, California, Ohio, Virginia, Ontario, Lesparre-Medoc (France) and Sydney (Australia). Regional championships were the largest non-World Cup events to date. Hundreds of spectators attended most regionals. Thanks to team dues and merchandise sales, most regionals turned a profit, which will help fund more regional events next season. A greater volume of dedicated volunteers and better game play standards ensured that each regional was run smoothly and professionally. The Macaulay Marauders, from Macaulay Honors College in New York City, called the Northeast regional â&#x20AC;&#x153;one of the best-organized tournamentsâ&#x20AC;? they have ever attended.

World Cup Eighty teams will compete in World Cup VI (April 13-14, 2013): 60 teams that qualify through regionals in Division 1, and 20 teams that sign up first-come, firstserved in Division 2. The World Cup moved from New York, NY to Kissimmee, INTERNATIONAL QUIDDITCH ASSOCIATION 2012 YEAR IN REVIEW

The Australian national team at the Summer

FL, where the Kissimmee Convention and Visitors Bureau is co-hosting the event and providing $30,000 in in-kind donations and sponsorships. The World Cup is being optimized to bring in more revenue, including better revenue from local hotels, player registration, parking, and an afterparty. With this support, the IQA hopes to make World Cup profitable enough to set up a sound operating budget for the 2013-2014 season. The IQA created the World Cup Organizing Team (WCOT) to plan the event year-round, which comprises five different sub-departments that meet weekly. This is the first time an organizing team has been formed so early, and the results are apparent: this World Cup will be the most well-organized and professionally run World Cup to date.

Quidditch Summer Games The IQA hosted a two-day exposition event called the Quidditch Summer Games in Oxford, England. The weekend included a five-team tournament comprising national teams from the US, Australia, Canada, UK, and France, as well as several expo games hosted at an official Olympic torch-lighting ceremony in the city. This event exposed the sport to millions of viewers and readers on the BBC and CNN, among many other global media outlets.

Game Play The IQAâ&#x20AC;&#x2122;s game play department released the sixth edition of the IQA rulebook. The ranking system was further developed to better represent team performance. Many new procedures and guidelines were put in place that increased the IQAâ&#x20AC;&#x2122;s level of professionalism and legitimacy, including creating a set of best practices for setting up game play at tournaments, requiring teams to submit rosters, creating systems for appealing games, reporting player misconduct, and transferring players between official teams. 4

The referee development team was created, and from July 2012 to Feburary 2013 has already traveled to over 80 events in three countries to certify 100 referees. It was a new requirement in the membership plan for each team to attempt to certify one player as a head referee, ensuring that every team has a stake in raising the professionalism of the game. Similarly, nearly a dozen snitch training academies were held to develop snitch talent, ensuring longer games.

Community This past year, the IQA solidified community networks and professional partnerships in many ways. Overall dues-paying team membership increased by 28%, to 194 official teams. International quidditch membership grew by an amazing 100%, thanks in large part to the popularity of the Summer Games and the continued development of the sport in Australia and Mexico. For the first time, a Mexican team competed in a US tournament, Western Cup III in Los Angeles.

QuidCon Many of our players grew even closer in 2012. The first-ever QuidCon, held in Chicago this past July, brought almost 100 players together from across North America. They spent a weekend immersed in a social atmosphere free of the hectic “hello-good byes” common at most tournaments. At QuidCon, participants attended sessions like team management, fundraising, tournament planning, coaching, PR and recruitment, Q&A panels, and more. An interregional tournament allowed players to bond with crosstown rivals, while a formal dinner, the Sirius Black Tie Ball, and group sightseeing in Chicago gave participants a chance to really befriend those they’d only previously known through the internet.

Penpal and Mentorship Programs Just as QuidCon helped transcend state and regional lines, the membership department’s penpal program helped bridge the gaps across oceans. The initiative, which in 2012 connected 24 teams in such cities as Salt Lake City and Tolouse, France, and San Francisco and Wollongong, Australia, instilled the “International” part of our organization’s name with even greater significance. Penpal teams write each other letters, send care packages, and chat over Facebook and Skype. Similarly, the IQA mentorship program, which pairs established teams with those just getting off the ground, strengthened the relationship between teams and allowed valuable information to flow in both directions.

Community Outreach Our development department’s literacy initiatives included continuing our book drive program, which has raised over 30,000 books in the past two years, and also raised $5,000 for Book Aid International. The requirement that each official member team participate in an outreach program also strengthened our teams’ ties to their communities; almost every team completed more than one such activity. 6

Community Reach Our social media reach also continued to grow: in 2012 we passed 10,000 followers on our Twitter account and achieved a Facebook reach of 22,000. The incorporation of the IQA’s conventions team into the marketing department solidified those events as valuable recruitment tools and community-building opportunities throughout the year. The IQA partnered with the filmmaking team of CinemaDuo, whose upcoming film showcasing the sport will allow players across the world to see better than ever the things they have in common. Whether through personal relationships or large-scale meetups, the IQA has created a focus on community that continues to resonate throughout the league, and ever-farther around the world.

Creativity Although it sounds somewhat abstract compared to its co-objectives community and competition, creativity is nevertheless an important facet of our organization. Starting and maintaining a quidditch team requires a lot of creativity, entrepreneurship, and dedication, and the IQA aims to always have a culture that fosters creativity. In 2012, the IQA explored new ways to spread awareness of the sport, including a dedicated “World Quidditch Day,” and a new magazine.

NYU holds a kidditch clinic at a Brooklyn elementary school.

Bringing Quidditch to Children The IQA held children’s quidditch (or “kidditch”) events at every U.S. regional championship tournament this fall. Teams around North America held kidditch events of their own-teaching quidditch to children at birthday parties, and as part of P.E. classes and summer camps.

New Types of Events Our players even found a way to work creativity into the structure of a regular tournament, by hosting “fantasy” events across the United States throughout the summer. Starting in the Southwest Region, these events were a unique take on tournaments, where players were drafted onto teams by general managers, and then competed on those teams in a tournament. Each event put its own spin on the trope, with some regions featuring player-managers, some custom t-shirts, and some auction drafts in which players were bid on with virtual “galleons.” This unique twist on the established tournament leaves us very excited to see new developments in the fantasy tournaments which will assuredly be making a return in summer 2013.

Quidditch World’s Fair Taking creativity and entrepreneurship a step further, in 2012 the IQA announced that the first-ever Quidditch World’s Fair exhibition would take place at QuidCon 2013, in Seattle, Washingon. The World’s Fair will be an exhibition and competition, where participants can enter inventions, creative service projects, or science fair-type presentations to be judged by their peers and a panel of businesspeople, academics, and IQA executives. The winners in each category will win cash prizes.

A massive group hug at the end of the Champions Series tournament in Boston. (Photo: April Gonzales)

Company Developments The IQA was incorporated as a nonprofit in 2010 by early 20-somethings with passion and dedication-and liberal arts degrees. The process of learning to run a sports league representing thousands of players and organizing major events around the world has been based on the executive leadership’s past work experience, research, intuition, and trial and error. In 2012, the IQA’s cumulative business, marketing, financial, and sports knowledge was translated into great improvements in the company’s legitimacy and internal management. The IQA board of directors expanded the knowledge base of the IQA’s leadership by creating an advisory board comprising finance, marketing, media, and sports executives, and began to have one-on-one meetings with professional sports league directors, including the WNBA and Major League Lacrosse. IQA COO Alicia Radford took over most day-to-day operations of the league, becoming the direct supervisor of the IQA’s seven department directors, and for the first time all seven director positions were filled with dedicated and talented individuals. This led to increased productivity and innovation in all areas. In 2012, more countries began to organize their own national quidditch organizations. The IQA has identified a need to create a uniform model for keeping the sport and its organization standardized around the world and ensure that long-term development and cooperation is smooth. The IQA is currently developing a National League program for organizers and teams that has high standards and significant benefits for teams to join. The groundwork laid in 2012 will mean an even more successful and well-run year in 2013, with more high-quality events, an increased sense of community in more countries, and better internal organization and responsiveness. We can’t wait. INTERNATIONAL QUIDDITCH ASSOCIATION 2012 YEAR IN REVIEW 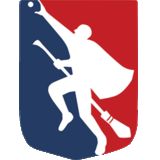 2012 was a year of major restructuring for the IQA, as well as an explosion of new events, new communities, and greater league professionali...

2012 was a year of major restructuring for the IQA, as well as an explosion of new events, new communities, and greater league professionali...