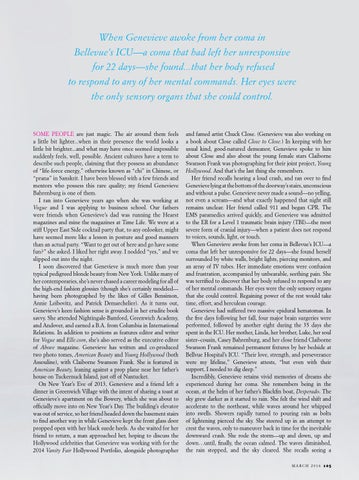 When Genevieve awoke from her coma in Bellevue’s ICU—a coma that had left her unresponsive for 22 days—she found...that her body refused to respond to any of her mental commands. Her eyes were the only sensory organs that she could control.

SOME PEOPLE are just magic. The air around them feels a little bit lighter...when in their presence the world looks a little bit brighter...and what may have once seemed impossible suddenly feels, well, possible. Ancient cultures have a term to describe such people, claiming that they possess an abundance of “life-force energy,” otherwise known as “chi” in Chinese, or “prana” in Sanskrit. I have been blessed with a few friends and mentors who possess this rare quality; my friend Genevieve Bahrenburg is one of them. I ran into Genevieve years ago when she was working at Vogue and I was applying to business school. Our fathers were friends when Genevieve’s dad was running the Hearst magazines and mine the magazines at Time Life. We were at a stiff Upper East Side cocktail party that, to any onlooker, might have seemed more like a lesson in posture and good manners than an actual party. “Want to get out of here and go have some fun?” she asked. I liked her right away. I nodded “yes,” and we slipped out into the night. I soon discovered that Genevieve is much more than your typical pedigreed blonde beauty from New York. Unlike many of her contemporaries, she’s never chased a career modeling for all of the high-end fashion glossies (though she’s certainly modeled— having been photographed by the likes of Gilles Bensimon, Annie Leibovitz, and Patrick Demarchelier). As it turns out, Genevieve’s keen fashion sense is grounded in her erudite book savvy. She attended Nightingale-Bamford, Greenwich Academy, and Andover, and earned a B.A. from Columbia in International Relations. In addition to positions as features editor and writer for Vogue and Elle.com, she’s also served as the executive editor of Above magazine. Genevieve has written and co-produced two photo tomes, American Beauty and Young Hollywood (both Assouline), with Claiborne Swanson Frank. She is featured in American Beauty, leaning against a prop plane near her father’s house on Tuckernuck Island, just off of Nantucket. On New Year’s Eve of 2013, Genevieve and a friend left a dinner in Greenwich Village with the intent of sharing a toast at Genevieve’s apartment on the Bowery, which she was about to officially move into on New Year’s Day. The building’s elevator was out of service, so her friend headed down the basement stairs to find another way in while Genevieve kept the front glass door propped open with her black suede heels. As she waited for her friend to return, a man approached her, hoping to discuss the Hollywood celebrities that Genevieve was working with for the 2014 Vanity Fair Hollywood Portfolio, alongside photographer

and famed artist Chuck Close. (Genevieve was also working on a book about Close called Close to Close.) In keeping with her usual kind, good-natured demeanor, Genevieve spoke to him about Close and also about the young female stars Claiborne Swanson Frank was photographing for their joint project, Young Hollywood. And that’s the last thing she remembers. Her friend recalls hearing a loud crash, and ran over to find Genevieve lying at the bottom of the doorway’s stairs, unconscious and without a pulse. Genevieve never made a sound—no yelling, not even a scream—and what exactly happened that night still remains unclear. Her friend called 911 and began CPR. The EMS paramedics arrived quickly, and Genevieve was admitted to the ER for a Level 1 traumatic brain injury (TBI)—the most severe form of cranial injury—when a patient does not respond to voices, sounds, light, or touch. When Genevieve awoke from her coma in Bellevue’s ICU—a coma that left her unresponsive for 22 days—she found herself surrounded by white walls, bright lights, piercing monitors, and an array of IV tubes. Her immediate emotions were confusion and frustration, accompanied by unbearable, seething pain. She was terrified to discover that her body refused to respond to any of her mental commands. Her eyes were the only sensory organs that she could control. Regaining power of the rest would take time, effort, and herculean courage. Genevieve had suffered two massive epidural hematomas. In the five days following her fall, four major brain surgeries were performed, followed by another eight during the 35 days she spent in the ICU. Her mother, Linda, her brother, Luke, her soul sister–cousin, Casey Bahrenburg, and her close friend Claiborne Swanson Frank remained permanent fixtures by her bedside at Bellvue Hospital’s ICU. “Their love, strength, and perseverance were my lifeline,” Genevieve attests, “but even with their support, I needed to dig deep.” Incredibly, Genevieve retains vivid memories of dreams she experienced during her coma. She remembers being in the ocean, at the helm of her father’s Blackfin boat, Desperado. The sky grew darker as it started to rain. She felt the wind shift and accelerate to the northeast, while waves around her whipped into swells. Showers rapidly turned to pouring rain as bolts of lightening pierced the sky. She steered up in an attempt to crest the waves, only to maneuver back in time for the inevitable downward crash. She rode the storm—up and down, up and down…until, finally, the ocean calmed. The waves diminished, the rain stopped, and the sky cleared. She recalls seeing a MARCH 2016 105