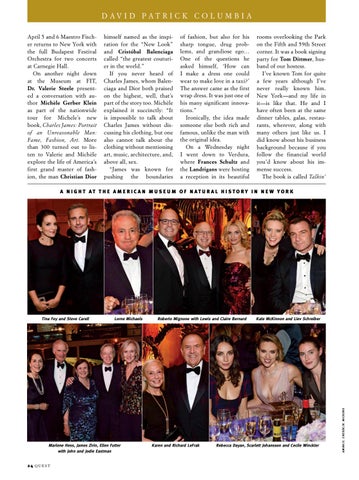 D AV I D PAT R I C K C O L U M B I A April 5 and 6 Maestro Fischer returns to New York with the full Budapest Festival Orchestra for two concerts at Carnegie Hall. On another night down at the Museum at FIT, Dr. Valerie Steele presented a conversation with author Michèle Gerber Klein as part of the nationwide tour for Michele’s new book, Charles James: Portrait of an Unreasonable Man: Fame, Fashion, Art. More than 300 turned out to listen to Valerie and Michèle explore the life of America’s first grand master of fashion, the man Christian Dior

himself named as the inspiration for the “New Look” and Cristóbal Balenciaga called “the greatest couturier in the world.” If you never heard of Charles James, whom Balenciaga and Dior both praised on the highest, well, that’s part of the story too. Michèle explained it succinctly: “It is impossible to talk about Charles James without discussing his clothing, but one also cannot talk about the clothing without mentioning art, music, architecture, and, above all, sex. “James was known for pushing the boundaries

of fashion, but also for his sharp tongue, drug problems, and grandiose ego… One of the questions he asked himself, ‘How can I make a dress one could wear to make love in a taxi?’ The answer came as the first wrap dress. It was just one of his many significant innovations.” Ironically, the idea made someone else both rich and famous, unlike the man with the original idea. On a Wednesday night I went down to Verdura, where Frances Schultz and the Landrigans were hosting a reception in its beautiful

rooms overlooking the Park on the Fifth and 59th Street corner. It was a book signing party for Tom Dittmer, husband of our hostess. I’ve known Tom for quite a few years although I’ve never really known him. New York—and my life in it—is like that. He and I have often been at the same dinner tables, galas, restaurants, wherever, along with many others just like us. I did know about his business background because if you follow the financial world you’d know about his immense success. The book is called Talkin’ 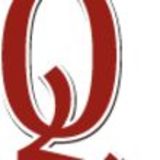