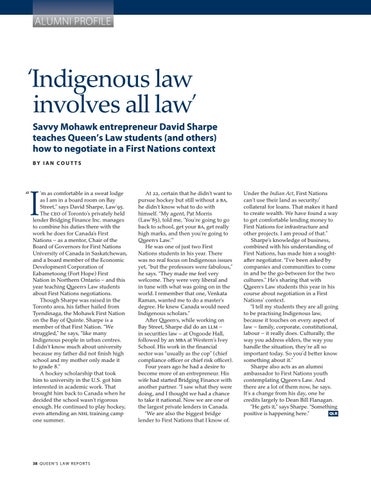 ’m as comfortable in a sweat lodge as I am in a board room on Bay Street,” says David Sharpe, Law’95. The ceo of Toronto’s privately held lender Bridging Finance Inc. manages to combine his duties there with the work he does for Canada’s First Nations – as a mentor, Chair of the Board of Governors for First Nations University of Canada in Saskatchewan, and a board member of the Economic Development Corporation of Eabametoong (Fort Hope) First Nation in Northern Ontario – and this year teaching Queen’s Law students about First Nations negotiations. Though Sharpe was raised in the Toronto area, his father hailed from Tyendinaga, the Mohawk First Nation on the Bay of Quinte. Sharpe is a member of that First Nation. “We struggled,” he says, “like many Indigenous people in urban centres. I didn’t know much about university because my father did not finish high school and my mother only made it to grade 8.” A hockey scholarship that took him to university in the U.S. got him interested in academic work. That brought him back to Canada when he decided the school wasn’t rigorous enough. He continued to play hockey, even attending an nhl training camp one summer.

At 22, certain that he didn’t want to pursue hockey but still without a ba, he didn’t know what to do with himself. “My agent, Pat Morris (Law’85), told me, ‘You’re going to go back to school, get your ba, get really high marks, and then you’re going to Queen’s Law.’” He was one of just two First Nations students in his year. There was no real focus on Indigenous issues yet, “but the professors were fabulous,” he says. “They made me feel very welcome. They were very liberal and in tune with what was going on in the world. I remember that one, Venkata Raman, wanted me to do a master’s degree. He knew Canada would need Indigenous scholars.” After Queen’s, while working on Bay Street, Sharpe did do an llm – in securities law – at Osgoode Hall, followed by an mba at Western’s Ivey School. His work in the financial sector was “usually as the cop” (chief compliance officer or chief risk officer). Four years ago he had a desire to become more of an entrepreneur. His wife had started Bridging Finance with another partner. “I saw what they were doing, and I thought we had a chance to take it national. Now we are one of the largest private lenders in Canada. “We are also the biggest bridge lender to First Nations that I know of.

Under the Indian Act, First Nations can’t use their land as security/ collateral for loans. That makes it hard to create wealth. We have found a way to get comfortable lending money to First Nations for infrastructure and other projects. I am proud of that.” Sharpe’s knowledge of business, combined with his understanding of First Nations, has made him a soughtafter negotiator. “I’ve been asked by companies and communities to come in and be the go-between for the two cultures.” He’s sharing that with Queen’s Law students this year in his course about negotiation in a First Nations’ context. “I tell my students they are all going to be practising Indigenous law, because it touches on every aspect of law – family, corporate, constitutional, labour – it really does. Culturally, the way you address elders, the way you handle the situation, they’re all so important today. So you’d better know something about it.” Sharpe also acts as an alumni ambassador to First Nations youth contemplating Queen’s Law. And there are a lot of them now, he says. It’s a change from his day, one he credits largely to Dean Bill Flanagan. “He gets it,” says Sharpe. “Something QLR positive is happening here.” 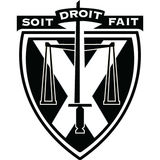 The 2017 edition of our print magazine, Queen's Law Reports. If you'd like a print copy and haven't received one (and are a Queen's Law alum...

The 2017 edition of our print magazine, Queen's Law Reports. If you'd like a print copy and haven't received one (and are a Queen's Law alum...