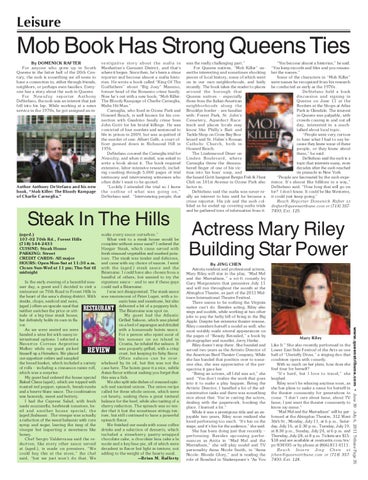 Mob Book Has Strong Queens Ties By DOMENICK RAFTER For anyone who grew up in South Queens in the lat ter half of the 20th Century, t he mob is something we all seem to have a connection to; either through friends, neighbors, or perhaps even familie s. Everyone has a stor y about the mob in Queens. Fo r N e w s d ay r e p o r t e r A n t h o n y DeStefano, the mob was an interest that just fell into his lap. While working at a news service in the 1970s, he got assigned an in-

v e s t i g a t i ve s t o r y a b o u t t he m a f i a i n Manhat tan’s Garment District, a nd that’s where it began. Since then, he’s been a crime reporter and become almost a mafia historian. He wrote a book called “King Of The Godfathers” about “Big Joey” Massino, former head of the Bonanno crime family. Now he’s out with a new book; “Mob Killer: The Bloody Rampage of Charlie Carneglia, Mafia Hit Man.” Carneglia, who lived in Ozone Park and Howard Beach, is well known for his connection with Gambino family crime boss John Got t i for his br utal killings. He was convicted of four murders and sentenced to life in prison in 2009, but was acquitted of the murder of one: Albert Gelb, a cour t officer gunned down in Richmond Hill in 1976. DeStefano covered the Carneglia trial for Newsday, and when it ended, was asked to write a book about it. The book required extensive, labor-intensive research, including combing through 5,000 pages of trial testimony and interviewing witnesses who often didn’t want to be quoted. “Luckily I attended the trial so I knew the outline of what was going on,” DeStefano said. “Interviewing people, that

Steak In The Hills

“You become almost a historian,” he said. “You keep records and file s and you remember the names.” Some of the characters in “Mob Killer” were names he recognized from his research he conducted as early as the 1970s. DeStefano held a book discussion and signing in Queens on June 11 at the Borders at the Shops at Atlas Park in Glendale. The interest in Queens was palpable, with crowds coming in and out all day, interested in a muchtalked about local topic. “People were very curious to hear what I had to say because they knew some of these people, or they knew about them,” he said. DeStefano said the mob is a topic that interests many, even decades after the mob reached its pinnacle in New York. “People are fascinated by the mob experience. It’s almost like folklore in a way,” DeStefano said. “How long that will go on for? I don’t know. It could be like Westerns, it could just keep going.” Reach Reporter Domenick Rafter at drafter@queenstribune.com or (718) 3577400, Ext. 125.

Actress Mary Riley Building Star Power By JING CHEN Astoria resident and professional actress, Mar y Riley w ill star in the play, “Mad Mel and the Marradians,” a sci-fi comedy by Gary Morgenstein that premieres July 11 and will run throughout the month at the Abingdon Theatre, as part of the 2011 Midtown International Theatre Festival. There seems to be nothing the Virginia native can’t do. Besides acting, Riley also sings and models, while working at two other jobs to pay the hefty bill of living in the Big Apple. Despite her extensive theater resume, Riley considers herself a model as well, who most notably made several appearances on the pages of “Beauty Revealed,” a book by photographer and novelist, Jerry Harke. Riley doesn’t stop there. She founded and served two years as t he Art ist ic Director of the American Bard Theater Company. While she has handed that position over to someone else, she was appreciative of the perspective it gave her. “Being an actress, all I did was act,” she said. “You don’t realize the work that goes into it to make a play happen. Being the Ar t ist ic Director, I handled a lot of the administrative tasks and there was something nice about that. You’re casting the actors, dealing with the paperwork, booking the place. I learned a lot.” While it was a prestigious title and an enjoyable two years, Riley soon realized she loved performing too much. “It’s fun on the stage, and it’s fun for the audience,” she said. She has been doing just that recently – per for ming. Be side s upcomi ng p er formances as Anita in “Mad Mel and the Marradians,” she will play model and TV personality Anna Nicole Smith, in “Anna Nicole: Blonde Glory,” and is reading the role of Rosalind in Shakespeare’s “As You

make e ver y sauce our selve s.” What visit to a steak house would be complete without some meat? I ordered the Hanger Steak, which came served with fresh steamed vegetables and mashed potatoes. The steak was tender and delicious, and came with my choice of sauces. I went with the (aged.) steak sauce and the Béarnaise. I could have also chosen from a handful of others, but wanted to tr y the In the early evening of a beautiful sum- signature sauce – and to see if these guys mer day, a guest and I decided to visit a could nail a Béarnaise. restaurant on 70th Road in Forest Hills in I was not disappointed. The steak sauce the heart of the area’s dining district. With was reminiscent of Peter Luger, with a tosteaks, chops, seafood and more, mato base and sweetness, but also (aged.) offers an upscale meal that delivered a bit of a peppery kick. neither matches the price or at ti- RESTAURANT The Béarnaise was spot on. tude of a big-time steak house, My guest had the Atlantic but definitely holds its own in flaGrilled Salmon, which was plated vor. on a bed of asparagus and drizzled As we were seated we were with a homemade hoisin sauce. handed a wine list with many inFor a person who spent most of ternational options. I selected a his summer on an island in Navarros Correas Argentine Croatia, he inhaled the salmon. It Malbec while my guest picked was properly grilled, with a crisp himself up a Heineken. We placed crust, but keeping its fishy flavor. our appetizer orders and sampled Often salmon can be overthe bread basket, which included a variety whelmed by its oil, but this was not the of rolls – including a cinnamon raisin roll, case here. The hoisin gave it a nice, subtle which was a surprise. Asian flavor without making you forget that My guest had ordered the house special this was a fish. Baked Clams (aged.), which are topped with We also split side dishes of creamed spinroasted red pepper, spinach, breadcrumbs ach and sautéed onions. The onion recipe and a beurre blanc sauce. The combination called for three whole onions, which were was heavenly, sweet and but tery. cut hear ty, making them a great textural I had the Caprese Salad, with fresh balance for the beef, while also tasting of a made mozzarella, beefsteak tomatoes, ba- sherr y reduction. The spinach was so tens i l a n d a n o t h e r h o u s e s p e c i a l , t h e der that it lost the sometimes stringy tex(aged.)balsamic. The vinegar was actually ture, but still continued to have a powerful a reduction of the sweet balsamic with corn spinach flavor. syrup a nd sugar, leaving the tang of the We finished our meals with some coffee vinegar but impar t ing a sweetne ss like drinks and a select ion of de ssert s, which honey. i ncluded a strawber r y pastr y-wrapped Chef Sergio Valder rama said t he re- chocolate cake, a chocolate lava cake a la duct ion, like e ver y ot her sauce ser ved mode and a key lime pie, all of which were at (aged.), is made on premises. “We decadent in flavor but light in texture, not could buy this at the store,” the chef adding to the weight of the hear ty meal. said, “but we just won’t do that. We —Br ian M. Raffer ty (aged.) 107-02 70th Rd., Forest Hills (718) 544-2433 CUISINE: Steak House PARKING: Street CREDIT CARDS: All major HOURS: Open Mon-Sat at 11:30 a.m. Closes Sun-Wed at 11 pm; Thu-Sat til midnight

was the really challenging part.” For Queens natives, “Mob Killer” unearths interest ing and sometimes shocking pieces of local histor y, some of which went on in our own neighborhoods, and fairly recently. The book takes the reader to places around the borough that Queens natives – especially those from the Italian-American neighborhoods along the Brooklyn border – are familiar with: Forest Park, St. John’s Cemeter y, Aqueduct Racetrack and places locals may know like Philly’s Bait and Tackle Shop on Cross Bay Boulevard and St. Helen’s Roman Catholic Church, both in Howard Beach. The Lindenwood Diner on Linden Boulevard, where Carneglia threw the dismembered finger of one of his victims into his boss’ soup, and the famed Got ti hangout Bergin Fish &amp; Hunt Club on 101st Avenue in Ozone Park also factor in. DeStefano said the mafia was never really an interest to him until he became a crime repor ter. His job and the mob collided as he ended up covering mafia trials and he gathered tons of information from it.