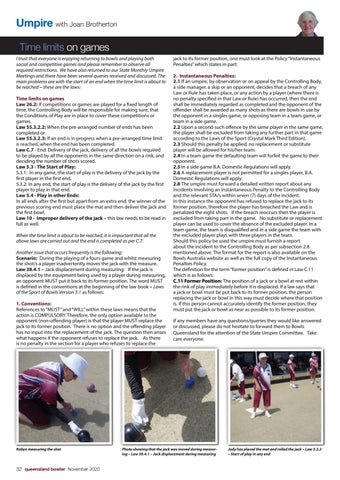 Umpire with Joan Brotherton Time limits on games I trust that everyone is enjoying returning to bowls and playing both social and competitive games and please remember to observe all required restrictions. We have also returned to our State Monthly Umpire Meetings and there have been several queries received and discussed. The main problems are with the start of an end when the time limit is about to be reached – these are the laws: Time limits on games Law 26.2: If competitions or games are played for a fixed length of time, the Controlling Body will be responsible for making sure, that the Conditions of Play are in place to cover these competitions or games. Law 55.3.2.2: When the pre-arranged number of ends has been completed or Law 55.3.2.3: If an end is in progress when a pre-arranged time limit is reached, when the end has been completed. Law C.7 - End: Delivery of the jack, delivery of all the bowls required to be played by all the opponents in the same direction on a rink, and deciding the number of shots scored. Law 5.3 - The Start of Play: 5.3.1: In any game, the start of play is the delivery of the jack by the first player in the first end. 5.3.2: In any end, the start of play is the delivery of the jack by the first player to play in that end. Law 5.4 - Play in other Ends: In all ends after the first but apart from an extra end, the winner of the previous scoring end must place the mat and then deliver the jack and the first bowl. Law 10 - Improper delivery of the jack – this law needs to be read in full as well. When the time limit is about to be reached, it is important that all the above laws are carried out and the end is completed as per C.7. Another issue that occurs frequently is the following: Scenario: During the playing of a fours game and whilst measuring the shot/s a player inadvertently moves the jack with the measure. Law 38.4.1 – Jack displacement during measuring: If the jack is displaced by the equipment being used by a player during measuring, an opponent MUST put it back to its former position. The word MUST is defined in the conventions at the beginning of the law book – Laws of the Sport of Bowls Version 3.1 as follows: 1. Conventions: References to “MUST” and “WILL” within these laws means that the action is COMPULSORY. Therefore, the only option available to the opponent (non-offending player) is that the player MUST replace the jack to its former position. There is no option and the offending player has no input into the replacement of the jack. The question then arises what happens if the opponent refuses to replace the jack. As there is no penalty in the section for a player who refuses to replace the

jack to its former position, one must look at the Policy “Instantaneous Penalties” which states in part: 2. Instantaneous Penalties: 2.1 If an umpire, by observation or on appeal by the Controlling Body, a side manager. a skip or an opponent, decides that a breach of any Law or Rule has taken place, or any action by a player (where there is no penalty specified in that Law or Rule) has occurred, then the end shall be immediately regarded as completed and the opponent of the offender shall be awarded as many shots as there are bowls in use by the opponent in a singles game, or opposing team in a team game, or team in a side game. 2.2 Upon a second such offence by the same player in the same game, the player shall be excluded from taking any further part in that game according to the Laws of the Sport (Crystal Mark Third Edition). 2.3 Should this penalty be applied, no replacement or substitute player will be allowed for his/her team. 2.4 In a team game the defaulting team will forfeit the game to their opponent. 2.5 In a side game B.A. Domestic Regulations will apply. 2.6 A replacement player is not permitted for a singles player, B.A. Domestic Regulations will apply. 2.8 The umpire must forward a detailed written report about any incidents involving an Instantaneous Penalty to the Controlling Body and the relevant STA/s within seven (7) days of the incident. In this instance the opponent has refused to replace the jack to its former position, therefore the player has breached the Law and is penalized the eight shots. If the breach reoccurs then the player is excluded from taking part in the game. No substitute or replacement player can be used to cover the absence of the excluded player. In a team game, the team is disqualified and in a side game the team with the excluded player plays with three players in the team. Should this policy be used the umpire must furnish a report about the incident to the Controlling Body as per subsection 2.8 mentioned above. The format for the report is also available on the Bowls Australia website as well as the full copy of the Instantaneous Penalties Policy. The definition for the term “former position” is defined in Law C.11 which is as follows: C.11 Former Position: The position of a jack or a bowl at rest within the rink of play immediately before it is displaced. If a law says that a jack or bowl must be put back to its former position, the person replacing the jack or bowl in this way must decide where that position is. If this person cannot accurately identify the former position, they must put the jack or bowl as near as possible to its former position. If any members have any questions/queries they would like answered or discussed, please do not hesitate to forward them to Bowls Queensland for the attention of the State Umpire Committee. Take care everyone. 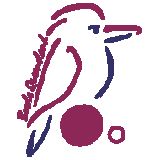