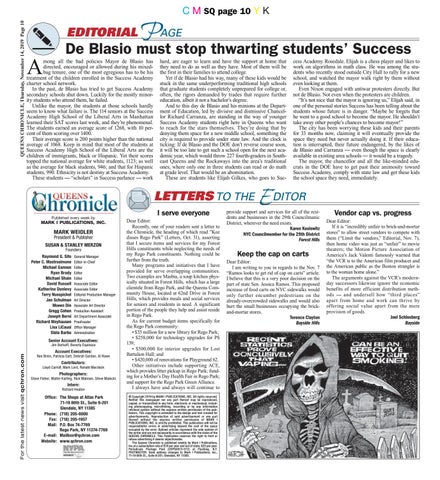 mong all the bad policies Mayor de Blasio has directed, encouraged or allowed during his mixedbag tenure, one of the most egregious has to be his treatment of the children enrolled in the Success Academy charter school network. In the past, de Blasio has tried to get Success Academy secondary schools shut down. Luckily for the mostly minority students who attend them, he failed. Unlike the mayor, the students at those schools hardly seem to know what failure is. The 114 seniors at the Success Academy High School of the Liberal Arts in Manhattan learned their SAT scores last week, and they’re phenomenal. The students earned an average score of 1268, with 10 percent of them scoring over 1400. Their average score is 200 points higher than the national average of 1068. Keep in mind that most of the students at Success Academy High School of the Liberal Arts are the children of immigrants, black or Hispanic. Yet their scores topped the national average for white students, 1123; as well as the average for black students, 946; and that for Hispanic students, 990. Ethnicity is not destiny at Success Academy. These students — “scholars” in Success parlance — work

hard, are eager to learn and have the support at home that they need to do as well as they have. Most of them will be the first in their families to attend college. Yet if de Blasio had his way, many of these kids would be stuck in the same underperforming traditional high schools that graduate students completely unprepared for college or, often, the rigors demanded by trades that require further education, albeit it not a bachelor’s degree. And to this day de Blasio and his minions at the Department of Education, led by divisive and dismissive Chancellor Richard Carranza, are standing in the way of younger Success Academy students right here in Queens who want to reach for the stars themselves. They’re doing that by denying them space for a new middle school, something the city is required to provide under state law. And the clock is ticking: If de Blasio and the DOE don’t reverse course soon, it will be too late to get such a school open for the next academic year, which would throw 227 fourth-graders in Southeast Queens and the Rockaways into the area’s traditional ones, where only one in three students can read or do math at grade level. That would be an abomination. These are students like Elijah Gilkes, who goes to Suc-

LETTERS TO THE Published every week by

I serve everyone Dear Editor: Recently, one of your readers sent a letter to the Chronicle, the heading of which read ”Koz disses Rego Park” (Letters, Oct. 31), asserting that I secure items and services for my Forest Hills constituents while neglecting the needs of my Rego Park constituents. Nothing could be further from the truth. Many programs and initiatives that I have provided for serve overlapping communities. Two examples are Masbia, a soup kitchen physically situated in Forest Hills, which has a large clientele from Rego Park, and the Queens Community House, located at 62nd Drive in Forest Hills, which provides meals and social services for seniors and residents in need. A significant portion of the people they help and assist reside in Rego Park. As for current budget items specifically for the Rego Park community: • $33 million for a new library for Rego Park; • $258,000 for technology upgrades for PS 139; • $500,000 for interior upgrades for Lost Battalion Hall; and • $420,000 of renovations for Playground 62. Other initiatives include supporting ACE, which provides litter pickup in Rego Park; funding for a Mother’s Day Health Fair in Rego Park; and support for the Rego Park Green Alliance. I always have and always will continue to © Copyright 2019 by MARK I PUBLICATIONS, INC. All rights reserved. Neither this newspaper nor any part thereof may be reproduced, copied, or transmitted in any form, electronic or mechanical, including photocopying, microfilming, recording or by any information retrieval system without the express written permission of the publishers. This copyright is extended to the design and text created for advertisements. Reproduction of said advertisement or any part thereof without the express written permission of MARK I PUBLICATIONS, INC. is strictly prohibited. This publication will not be responsiblefor errors in advertising beyond the cost of the space occupied by the error. Bylined articles represent the sole opinion of the writer and are not necessarily in accordance with the views of the QUEENS CHRONICLE. This Publication reserves the right to limit or refuse advertising it deems objectionable. The Queens Chronicle is published weekly by Mark I Publications, Inc.at a subscription rate of $19 per year and out of state, $25 per year. Periodicals Postage Paid (USPS0013-572) at Flushing, N.Y. POSTMASTER: Send address changes to Mark I Publications, Inc., 71-19 80th St., Suite 8-201, Glendale, NY 11385.

cess Academy Rosedale. Elijah is a chess player and likes to work on algorithms in math class. He was among the students who recently stood outside City Hall to rally for a new school, and watched the mayor walk right by them without even looking at them. Even Nixon engaged with antiwar protesters directly. But not de Blasio. Not even when the protesters are children. “It’s not nice that the mayor is ignoring us,” Elijah said, in one of the personal stories Success has been telling about the students whose future is in danger. “Maybe he forgets that he went to a good school to become the mayor. He shouldn’t take away other people’s chances to become mayor!” The city has been worrying these kids and their parents for 33 months now, claiming it will eventually provide the space they need but never actually doing it. If their education is interrupted, their future endangered, by the likes of de Blasio and Carranza — even though the space is clearly available in existing area schools — it would be a tragedy. The mayor, the chancellor and all the like-minded educrats in the DOE have to get past their animosity toward Success Academy, comply with state law and get these kids the school space they need, immediately.

provide support and services for all of the residents and businesses in the 29th Councilmanic District, wherever the need exists. Karen Koslowitz NYC Councilmember for the 29th District Forest Hills

Keep the cap on carts Dear Editor: I am writing to you in regards to the Nov. 7 “Ramos looks to get rid of cap on carts” article. I believe that this is a very poor decision on the part of state Sen. Jessica Ramos. This proposed increase of food carts on NYC sidewalks would only further encumber pedestrians on the already-overcrowded sidewalks and would also hurt the small businesses occupying the brickand-mortar stores. Terence Clayton Bayside Hills

Vendor cap vs. progress Dear Editor: If it is “incredibly unfair to brick-and-mortar stores” to allow street vendors to compete with them (“Limit the vendors,” Editorial, Nov. 7), then home video was just as “unfair” to movie theaters; the Motion Picture Association of America’s Jack Valenti famously warned that “the VCR is to the American film producer and the American public as the Boston strangler is to the woman home alone.” The arguments against the VCR’s modernday successors likewise ignore the economic benefits of more efficient distribution methods — and undersell how “third places” apart from home and work can thrive by offering social value apart from the mere provision of goods. Joel Schlosberg Bayside