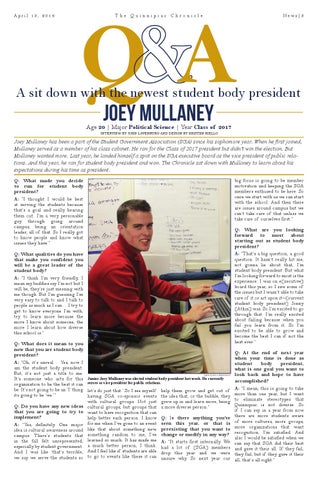 A sit down with the newest student body president

Joey Mullaney has been a part of the Student Government Association (SGA) since his sophomore year. When he first joined, Mullaney served as a member of his class cabinet. He ran for the Class of 2017 president but didn’t win the election. But Mullaney wanted more. Last year, he landed himself a spot on the SGA executive board as the vice president of public relations. And this year, he ran for student body president and won. The Chronicle sat down with Mullaney to learn about his expectations during his time as president. Q: What made you decide to run for student body president? A: “I thought I would be best at serving the students because that’s a goal and really hearing them out. I’m a very personable guy through going around campus, being an orientation leader, all of that. So I really got to know people and know what issues they have.” Q: What qualities do you have that make you confident you will be a great leader of the student body? A: “I think I’m very friendly, I mean my buddies say I’m not but I will be, they’re just messing with me though. But I’m guessing I’m very easy to talk to and I talk to people as much as I can….I try to get to know everyone I’m with, try to learn more because the more I know about someone, the more I learn about how diverse this school is.” Q: What does it mean to you now that you are student body president? A: “Oh, it’s unreal… Yes, now I am the student body president. But, it’s not just a title to me. ERIN KANE/CHRONICLE It’s someone who acts for this Junior Joey Mullaney was elected student body president last week. He currently organization to be the best it can serves as vice president for public relations. be. It’s not going to be an ‘I’ thing let’s do just that.’ So I see myself help them grow and get out of its going to be ‘we.’” having SGA co-sponsor events the idea that, or the bubble, they with cultural groups. Not just grew up in and learn more, being Q: Do you have any new ideas cultural groups, but groups that a more diverse person.” that you are going to try to want to have recognition that can implement? help better each person. I know Q: Is there anything you’ve A: “Yes, definitely. One major for me when I’ve gone to an event seen this year, or that is idea is cultural awareness around like that about something new, preexisting that you want to campus. There’s students that something random to me, I’ve change or modify in any way? in the fall felt unrepresented, learned so much. It has made me A: “It starts first internally. We especially by student government. a much better person, I think. had a lot of [SGA] members And I was like ‘that’s terrible, And I feel like if students are able drop this year and we were we say we serve the students so to go to events like these it can unsure why. So next year our

big focus is going to be member motivation and keeping the SGA members enthused to be here. So once we start with us we can start with the school. And then there are issues around campus but we can’t take care of that unless we take care of ourselves first.”

Q: What are you looking forward to most about starting out as student body president? A: “That’s a big question, a good question. It hasn’t really hit me, not gonna lie about that, I’m student body president. But what I’m looking forward to most is the experience. I was on e[xecutive] board this year, so I saw some of the issues but I wasn’t able to take care of it or act upon it--[current student body president] Jonny [Atkin] was. So I’m excited to go through that. I’m really excited about failing because when you fail you learn from it. So I’m excited to be able to grow and become the best I can if not the best ever.” Q: At the end of next year when your time is done as student body president, what is one goal you want to look back and hope to have accomplished? A: “I mean, this is going to take more than one year, but I want to eliminate stereotypes that Quinnipiac is not diverse. So if I can say in a year from now there are more students aware of more cultures, more groups, more organizations that want recognition, I’m satisfied. And also I would be satisfied when we can say that SGA did their best and gave it their all. If they fail, they fail, but if they gave it their all, that’s all right.”

This year's 23rd Issue of the Quinnipiac Chronicle. 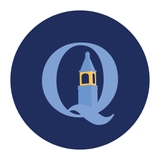 More from The Quinnipiac Chronicle