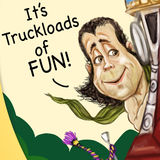 The QSM Magazine is a family humor magazine. It comprises satire and humor, caricatures and cartoons, jokes and funny anecdotes, brought to you by a thirty-something married man who lives in urban India, thinks of himself as a global citizen, and tries to balance family and work. It presents his view of the world seen through the lens of Indian culture. Other than Anand’s own parodies, the magazine also publishes humorous articles and anecdotes written by humor-writers around the world. This Magazine brings you: Laughter, Parody and Comedy; Political and Social Satire; Bollywood & Hollywood Fun Articles; Sketches, Caricatures, Comics, and Cartoons; Glimpses of Indian / Punjabi Culture, and a potpourri of American and Desi Political Humor.