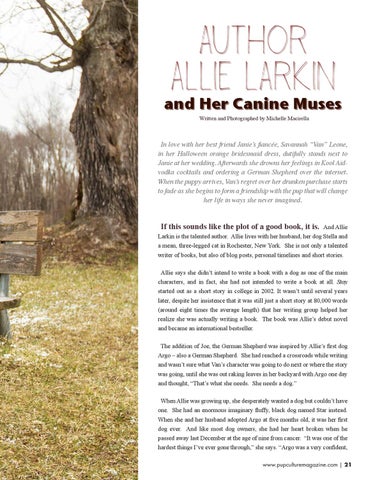 and Her Canine Muses Written and Photographed by Michelle Macirella

In love with her best friend Janie’s fiancée, Savannah “Van” Leone, in her Halloween orange bridesmaid dress, dutifully stands next to Janie at her wedding. Afterwards she drowns her feelings in Kool Aidvodka cocktails and ordering a German Shepherd over the internet. When the puppy arrives, Van’s regret over her drunken purchase starts to fade as she begins to form a friendship with the pup that will change her life in ways she never imagined.

If this sounds like the plot of a good book, it is.

And Allie Larkin is the talented author. Allie lives with her husband, her dog Stella and a mean, three-legged cat in Rochester, New York. She is not only a talented writer of books, but also of blog posts, personal timelines and short stories. Allie says she didn’t intend to write a book with a dog as one of the main characters, and in fact, she had not intended to write a book at all. Stay started out as a short story in college in 2002. It wasn’t until several years later, despite her insistence that it was still just a short story at 80,000 words (around eight times the average length) that her writing group helped her realize she was actually writing a book. The book was Allie’s debut novel and became an international bestseller. The addition of Joe, the German Shepherd was inspired by Allie’s first dog Argo – also a German Shepherd. She had reached a crossroads while writing and wasn’t sure what Van’s character was going to do next or where the story was going, until she was out raking leaves in her backyard with Argo one day and thought, “That’s what she needs. She needs a dog.” When Allie was growing up, she desperately wanted a dog but couldn’t have one. She had an enormous imaginary fluffy, black dog named Star instead. When she and her husband adopted Argo at five months old, it was her first dog ever. And like most dog owners, she had her heart broken when he passed away last December at the age of nine from cancer. “It was one of the hardest things I’ve ever gone through,” she says. “Argo was a very confident, www.pupculturemagazine.com | 21 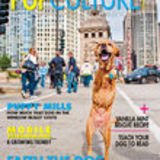 In this issue, we have articles aimed at providing you with some great ideas for a happy, healthy environment for both you and your pup. Pla...

In this issue, we have articles aimed at providing you with some great ideas for a happy, healthy environment for both you and your pup. Pla...