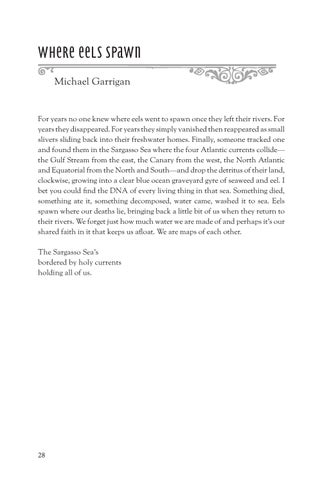 For years no one knew where eels went to spawn once they left their rivers. For years they disappeared. For years they simply vanished then reappeared as small slivers sliding back into their freshwater homes. Finally, someone tracked one and found them in the Sargasso Sea where the four Atlantic currents collide— the Gulf Stream from the east, the Canary from the west, the North Atlantic and Equatorial from the North and South—and drop the detritus of their land, clockwise, growing into a clear blue ocean graveyard gyre of seaweed and eel. I bet you could find the DNA of every living thing in that sea. Something died, something ate it, something decomposed, water came, washed it to sea. Eels spawn where our deaths lie, bringing back a little bit of us when they return to their rivers. We forget just how much water we are made of and perhaps it’s our shared faith in it that keeps us afloat. We are maps of each other. The Sargasso Sea’s bordered by holy currents holding all of us.