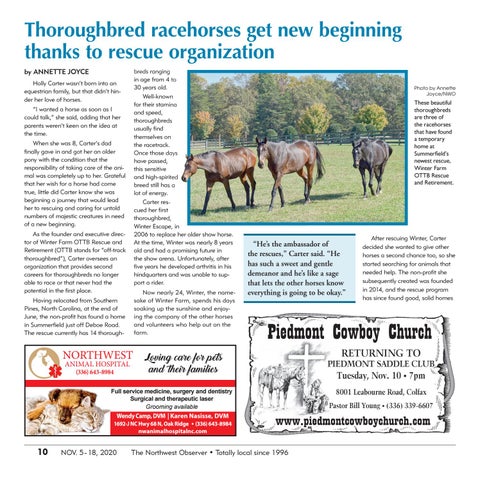 Thoroughbred racehorses get new beginning thanks to rescue organization by ANNETTE JOYCE Holly Carter wasn’t born into an equestrian family, but that didn’t hinder her love of horses. “I wanted a horse as soon as I could talk,” she said, adding that her parents weren’t keen on the idea at the time. When she was 8, Carter’s dad finally gave in and got her an older pony with the condition that the responsibility of taking care of the animal was completely up to her. Grateful that her wish for a horse had come true, little did Carter know she was beginning a journey that would lead her to rescuing and caring for untold numbers of majestic creatures in need of a new beginning. As the founder and executive director of Winter Farm OTTB Rescue and Retirement (OTTB stands for “off-track thoroughbred”), Carter oversees an organization that provides second careers for thoroughbreds no longer able to race or that never had the potential in the first place. Having relocated from Southern Pines, North Carolina, at the end of June, the non-profit has found a home in Summerfield just off Deboe Road. The rescue currently has 14 thorough-

breds ranging in age from 4 to 30 years old. Well-known for their stamina and speed, thoroughbreds usually find themselves on the racetrack. Once those days have passed, this sensitive and high-spirited breed still has a lot of energy. Carter rescued her first thoroughbred, Winter Escape, in 2006 to replace her older show horse. At the time, Winter was nearly 8 years old and had a promising future in the show arena. Unfortunately, after five years he developed arthritis in his hindquarters and was unable to support a rider. Now nearly 24, Winter, the namesake of Winter Farm, spends his days soaking up the sunshine and enjoying the company of the other horses and volunteers who help out on the farm.

These beautiful thoroughbreds are three of the racehorses that have found a temporary home at Summerfield’s newest rescue, Winter Farm OTTB Rescue and Retirement.

“He’s the ambassador of the rescues,” Carter said. “He has such a sweet and gentle demeanor and he’s like a sage that lets the other horses know everything is going to be okay.”

After rescuing Winter, Carter decided she wanted to give other horses a second chance too, so she started searching for animals that needed help. The non-profit she subsequently created was founded in 2014, and the rescue program has since found good, solid homes

The Northwest Observer • Totally local since 1996 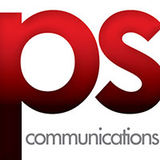