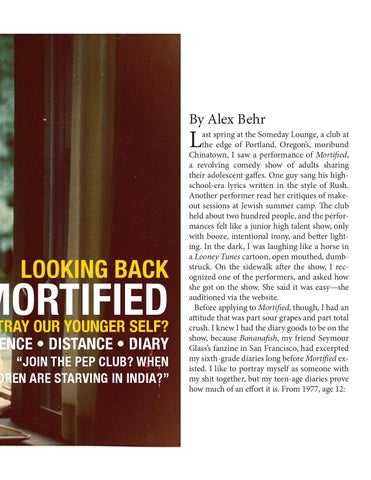 “JOIN THE PEP CLUB? WHEN DREN ARE STARVING IN INDIA?”

ast spring at the Someday Lounge, a club at the edge of Portland, Oregon’s, moribund Chinatown, I saw a performance of Mortified, a revolving comedy show of adults sharing their adolescent gaffes. One guy sang his highschool-era lyrics written in the style of Rush. Another performer read her critiques of makeout sessions at Jewish summer camp. The club held about two hundred people, and the performances felt like a junior high talent show, only with booze, intentional irony, and better lighting. In the dark, I was laughing like a horse in a Looney Tunes cartoon, open mouthed, dumbstruck. On the sidewalk after the show, I recognized one of the performers, and asked how she got on the show. She said it was easy—she auditioned via the website. Before applying to Mortified, though, I had an attitude that was part sour grapes and part total crush. I knew I had the diary goods to be on the show, because Bananafish, my friend Seymour Glass’s fanzine in San Francisco, had excerpted my sixth-grade diaries long before Mortified existed. I like to portray myself as someone with my shit together, but my teen-age diaries prove how much of an effort it is. From 1977, age 12: 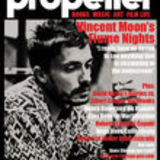