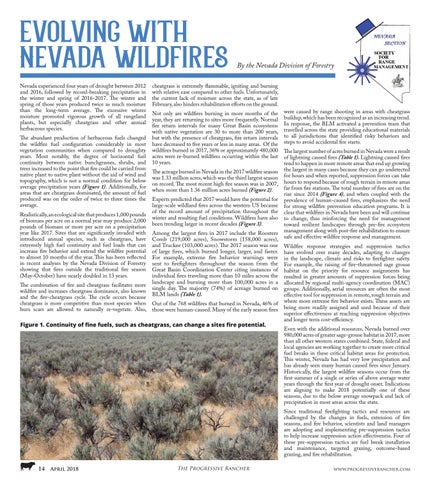 Evolving with Nevada Wildfires Nevada experienced four years of drought between 2012 and 2016, followed by record-breaking precipitation in the winter and spring of 2016-2017. The winter and spring of those years produced twice as much moisture than the long-term average. The excessive winter moisture promoted vigorous growth of all rangeland plants, but especially cheatgrass and other annual herbaceous species.

The abundant production of herbaceous fuels changed the wildfire fuel configuration considerably in most vegetation communities when compared to droughty years. Most notably, the degree of horizontal fuel continuity between native bunchgrasses, shrubs, and trees increased to the point that fire could be carried from native plant to native plant without the aid of wind and topography, which is not a normal condition for below average precipitation years (Figure 1). Additionally, for areas that are cheatgrass dominated, the amount of fuel produced was on the order of twice to three times the average. Realistically, an ecological site that produces 1,000 pounds of biomass per acre on a normal year may produce 2,000 pounds of biomass or more per acre on a precipitation year like 2017. Sites that are significantly invaded with introduced annual species, such as cheatgrass, have extremely high fuel continuity and fuel loads that can increase fire behavior and extend the wildfire potential to almost 10 months of the year. This has been reflected in recent analyses by the Nevada Division of Forestry showing that fires outside the traditional fire season (May-October) have nearly doubled in 13 years.

The combination of fire and cheatgrass facilitates more wildfire and increases cheatgrass dominance, also known and the fire-cheatgrass cycle. The cycle occurs because cheatgrass is more competitive than most species when burn scars are allowed to naturally re-vegetate. Also,

By the Nevada Division of Forestry

cheatgrass is extremely flammable, igniting and burning with relative ease compared to other fuels. Unfortunately, the current lack of moisture across the state, as of late February, also hinders rehabilitation efforts on the ground. Not only are wildfires burning in more months of the year, they are returning to sites more frequently. Normal fire return intervals for many Great Basin ecosystems with native vegetation are 30 to more than 200 years, but with the presence of cheatgrass, fire return intervals have decreased to five years or less in many areas. Of the wildfires burned in 2017, 36% or approximately 480,000 acres were re-burned wildfires occurring within the last 10 years.

The acreage burned in Nevada in the 2017 wildfire season was 1.33 million acres, which was the third largest season on record. The most recent high fire season was in 2007, when more than 1.36 million acres burned (Figure 2). Experts predicted that 2017 would have the potential for large-scale wildland fires across the western US because of the record amount of precipitation throughout the winter and resulting fuel conditions. Wildfires have also been trending larger in recent decades (Figure 3).

Among the largest fires in 2017 include the Roosters Comb (219,000 acres), Snowstorm (158,000 acres), and Truckee (103,000 acres). The 2017 season was one of large fires, which burned longer, larger, and faster. For example, extreme fire behavior warnings were sent to firefighters throughout the season from the Great Basin Coordination Center citing instances of individual fires traveling more than 10 miles across the landscape and burning more than 100,000 acres in a single day. The majority (74%) of acreage burned on BLM lands (Table 1). Out of the 768 wildfires that burned in Nevada, 46%Â of those were human-caused. Many of the early season fires

Figure 1. Continuity of fine fuels, such as cheatgrass, can change a sites fire potential.

were caused by range shooting in areas with cheatgrass buildup, which has been recognized as an increasing trend. In response, the BLM activated a prevention team that travelled across the state providing educational materials to all jurisdictions that identified risky behaviors and steps to avoid accidental fire starts. The largest number of acres burned in Nevada were a result of lightning caused fires (Table 1). Lightning caused fires tend to happen in more remote areas that end up growing the largest in many cases because they can go undetected for hours and when reported, suppression forces can take hours to respond because of rough terrain in remote areas far from fire stations. The total number of fires are on the rise since 2014 (Figure 4), and when coupled with the prevalence of human-caused fires, emphasizes the need for strong wildfire prevention education programs. It is clear that wildfires in Nevada have been and will continue to change, thus reinforcing the need for management toward resilient landscapes through pre-fire ecosystem management along with post-fire rehabilitation to ensure safe and effective wildfire response and management.

Wildfire response strategies and suppression tactics have evolved over many decades, adapting to changes in the landscape, climate and risks to firefighter safety. For example, the raising of fire-threatened sage grouse habitat on the priority for resource assignments has resulted in greater amounts of suppression forces being allocated by regional multi-agency coordination (MAC) groups. Additionally, aerial resources are often the most effective tool for suppression in remote, rough terrain and where more extreme fire behavior exists. These assets are being more readily assigned and used because of their superior effectiveness at reaching suppression objectives and longer term cost-efficiency.

Even with the additional resources, Nevada burned over 980,000 acres of greater sage-grouse habitat in 2017, more than all other western states combined. State, federal and local agencies are working together to create more critical fuel breaks in these critical habitat areas for protection. This winter, Nevada has had very low precipitation and has already seen many human caused fires since January. Historically, the largest wildfire seasons occur from the first summer of a single or series of above average water years through the first year of drought onset. Indications are aligning to make 2018 potentially one of these seasons, due to the below average snowpack and lack of precipitation in most areas across the state. Since traditional firefighting tactics and resources are challenged by the changes in fuels, extension of fire seasons, and fire behavior, scientists and land managers are adopting and implementing pre-suppression tactics to help increase suppression action effectiveness. Four of these pre-suppression tactics are fuel break installation and maintenance, targeted grazing, outcome-based grazing, and fire rehabilitation.