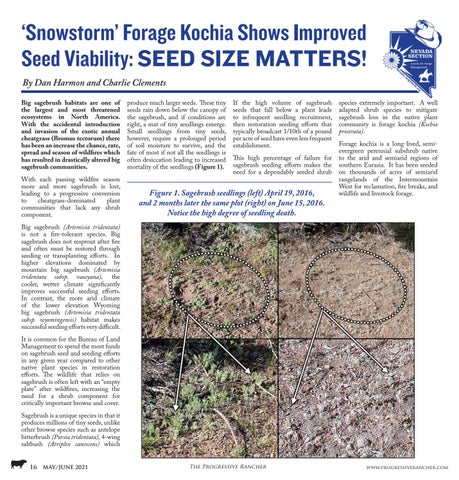 ‘Snowstorm’ Forage Kochia Shows Improved Seed Viability: SEED SIZE MATTERS! By Dan Harmon and Charlie Clements Big sagebrush habitats are one of the largest and most threatened ecosystems in North America. With the accidental introduction and invasion of the exotic annual cheatgrass (Bromus tectorum) there has been an increase the chance, rate, spread and season of wildfires which has resulted in drastically altered big sagebrush communities. With each passing wildfire season more and more sagebrush is lost, leading to a progressive conversion to cheatgrass-dominated plant communities that lack any shrub component.

produce much larger seeds. These tiny seeds rain down below the canopy of the sagebrush, and if conditions are right, a mat of tiny seedlings emerge. Small seedlings from tiny seeds, however, require a prolonged period of soil moisture to survive, and the fate of most if not all the seedlings is often desiccation leading to increased mortality of the seedlings (Figure 1).

If the high volume of sagebrush seeds that fall below a plant leads to infrequent seedling recruitment, then restoration seeding efforts that typically broadcast 1/10th of a pound per acre of seed have even less frequent establishment. This high percentage of failure for sagebrush seeding efforts makes the need for a dependably seeded shrub

species extremely important. A well adapted shrub species to mitigate sagebrush loss in the native plant community is forage kochia (Kochia prostrata). Forage kochia is a long-lived, semievergreen perennial subshrub native to the arid and semiarid regions of southern Eurasia. It has been seeded on thousands of acres of semiarid rangelands of the Intermountain West for reclamation, fire breaks, and wildlife and livestock forage.

Big sagebrush (Artemisia tridentata) is not a fire-tolerant species. Big sagebrush does not resprout after fire and often must be restored through seeding or transplanting efforts. In higher elevations dominated by mountain big sagebrush (Artemisia tridentata subsp. vaseyana), the cooler, wetter climate significantly improves successful seeding efforts. In contrast, the more arid climate of the lower elevation Wyoming big sagebrush (Artemisia tridentata subsp. wyomingensis) habitat makes successful seeding efforts very difficult. It is common for the Bureau of Land Management to spend the most funds on sagebrush seed and seeding efforts in any given year compared to other native plant species in restoration efforts. The wildlife that relies on sagebrush is often left with an “empty plate” after wildfires, increasing the need for a shrub component for critically important browse and cover. Sagebrush is a unique species in that it produces millions of tiny seeds, unlike other browse species such as antelope bitterbrush (Pursia tridentata), 4-wing saltbush (Atriplex canescens) which  16 MAY/JUNE 2021

The Progressive Rancher magazine is published 8 times each year. Our primary focus is on the agricultural industry in Nevada and Idaho and all the Western states, but at the same time we tackle nation-wide issues on the local and federal government levels. We are here to keep you informed of the important affairs of the industry! 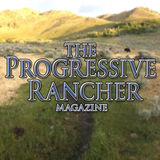