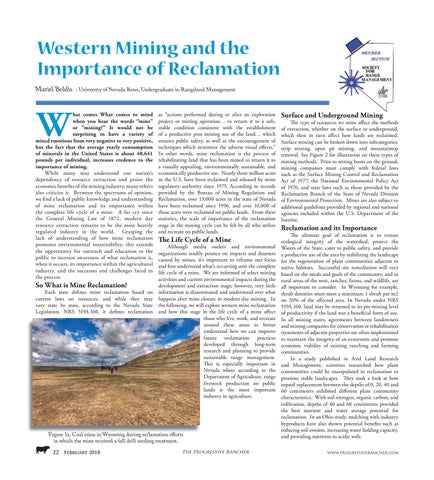 hat comes What comes to mind when you hear the words “mine” or “mining?” It would not be surprising to have a variety of mixed emotions from very negative to very positive, but the fact that the average yearly consumption of minerals in the United States is about 40,641 pounds per individual, increases credence to the importance of mining. While many may understand our nation’s dependency of resource extraction and praise the economic benefits of the mining industry, many others also criticize it. Between the spectrums of opinion, we fi nd a lack of public knowledge and understanding of mine reclamation and its importance within the complete life cycle of a mine. A far cry since the General Mining Law of 1872, modern day resource extraction remains to be the most heavily regulated industry in the world. Grasping the lack of understanding of how mine reclamation promotes environmental sustainability, this extends the opportunity for outreach and education to the public to increase awareness of what reclamation is, when it occurs, its importance within the agricultural industry, and the successes and challenges faced in the process.

So What is Mine Reclamation?

Each state defines mine reclamation based on current laws on resources; and while they may vary state by state, according to the Nevada State Legislation, NRS 519A.160, it defines reclamation

as “actions performed during or after an exploration project or mining operation… to return it to a safe, stable condition consistent with the establishment of a productive post mining use of the land… which ensures public safety, as well as the encouragement of techniques which minimize the adverse visual effects.” In other words, mine reclamation is the process of rehabilitating land that has been mined to return it to a visually appealing, environmentally sustainable, and economically productive use. Nearly three million acres in the U.S. have been reclaimed and released by mine regulatory authority since 1975. According to records provided by the Bureau of Mining Regulation and Reclamation, over 13,000 acres in the state of Nevada have been reclaimed since 1996, and over 10,000 of those acres were reclaimed on public lands. From these statistics, the scale of importance of the reclamation stage in the mining cycle can be felt by all who utilize and recreate on public lands.

The Life Cycle of a Mine

Although media outlets and environmental organizations readily pounce on impacts and disasters caused by mines, it’s important to reframe our focus and first understand what’s occurring over the complete life cycle of a mine. We are informed of select mining activities and current environmental impacts during the development and extraction stage; however, very little information is disseminated and understood over what happens after mine closure in modern day mining. In the following, we will explore western mine reclamation and how this stage in the life cycle of a mine affect those who live, work, and recreate around these areas to better understand how we can improve future reclamation practices developed through long-term research and planning to provide sustainable range management. This is especially important in Nevada where according to the Department of Agriculture, range livestock production on public lands is the most important industry in agriculture.

Figure 1a. Coal mine in Wyoming during reclamation efforts in which the mine received a fall drill seeding treatment. 22 February 2018

The type of resources we mine affect the methods of extraction, whether on the surface or underground, which then in turn affect how lands are reclaimed. Surface mining can be broken down into subcategories: strip mining, open pit mining, and mountaintop removal. See Figure 2 for illustration on these types of mining methods. Prior to setting boots on the ground, mining companies must comply with federal laws such as the Surface Mining Control and Reclamation Act of 1977, the National Environmental Policy Act of 1970, and state laws such as those provided by the Reclamation Branch of the State of Nevada Division of Environmental Protection. Mines are also subject to additional guidelines provided by regional and national agencies included within the U.S. Department of the Interior.

Reclamation and its Importance

The ultimate goal of reclamation is to restore ecological integrity of the watershed, protect the Waters of the State, cater to public safety, and provide a productive use of the area by stabilizing the landscape for the regeneration of plant communities adjacent to native habitats. Successful site remediation will vary based on the needs and goals of the community, and in rural areas of the west, ranches, farms, and wildlife, are all important to consider. In Wyoming for example, shrub densities must meet a minimum 1 shrub per m2 on 20% of the affected area. In Nevada under NRS 519A.160, land may be returned to its pre-mining level of productivity if the land was a beneficial form of use. In all mining states, agreements between landowners and mining companies for conservation or rehabilitation treatments of adjacent properties are often implemented to maintain the integrity of an ecosystem and promote economic viability of existing ranching and farming communities. In a study published in Arid Land Research and Management, scientists researched how plant communities could be manipulated in reclamation to promote stable landscapes. They took a look at how topsoil replacement between the depths of 0, 20, 40 and 60 centimeters exhibited different plant community characteristics. With soil nitrogen, organic carbon, and infiltration, depths of 40 and 60 centimeters provided the best nutrient and water storage potential for reclamation. In an Ohio study, mulching with industry byproducts have also shown potential benefits such as reducing soil erosion, increasing water holding capacity, and providing nutrients to acidic soils. www.progressiverancher.com