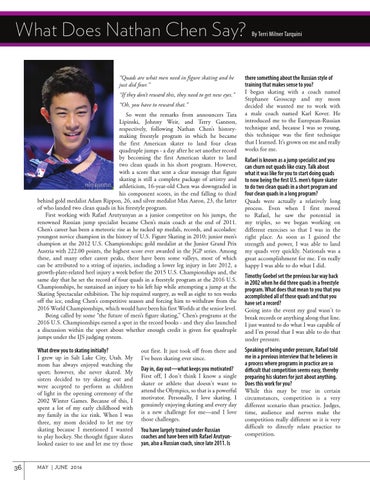 What Does Nathan Chen Say? “Quads are what men need in figure skating and he just did four.” “If they don’t reward this, they need to get new eyes.” “Oh, you have to reward that.” So went the remarks from announcers Tara Lipinski, Johnny Weir, and Terry Gannon, respectively, following Nathan Chen’s historymaking freestyle program in which he became the first American skater to land four clean quadruple jumps - a day after he set another record by becoming the first American skater to land two clean quads in his short program. However, with a score that sent a clear message that figure skating is still a complete package of artistry and PHOTO BY VICKI LUY athleticism, 16-year-old Chen was downgraded in his component scores, in the end falling to third behind gold medalist Adam Rippon, 26, and silver medalist Max Aaron, 23, the latter of who landed two clean quads in his freestyle program. First working with Rafael Arutyunyan as a junior competitor on his jumps, the renowned Russian jump specialist became Chen’s main coach at the end of 2011. Chen’s career has been a meteoric rise as he racked up medals, records, and accolades: youngest novice champion in the history of U.S. Figure Skating in 2010; junior men’s champion at the 2012 U.S. Championships; gold medalist at the Junior Grand Prix Austria with 222.00 points, the highest score ever awarded in the JGP series. Among these, and many other career peaks, there have been some valleys, most of which can be attributed to a string of injuries, including a lower leg injury in late 2012, a growth-plate-related heel injury a week before the 2015 U.S. Championships and, the same day that he set the record of four quads in a freestyle program at the 2016 U.S. Championships, he sustained an injury to his left hip while attempting a jump at the Skating Spectacular exhibition. The hip required surgery, as well as eight to ten weeks off the ice, ending Chen’s competitive season and forcing him to withdraw from the 2016 World Championships, which would have been his first Worlds at the senior level. Being called by some “the future of men’s figure skating,” Chen’s programs at the 2016 U.S. Championships earned a spot in the record books - and they also launched a discussion within the sport about whether enough credit is given for quadruple jumps under the IJS judging system.

What drew you to skating initially? I grew up in Salt Lake City, Utah. My mom has always enjoyed watching the sport; however, she never skated. My sisters decided to try skating out and were accepted to perform as children of light in the opening ceremony of the 2002 Winter Games. Because of this, I spent a lot of my early childhood with my family in the ice rink. When I was three, my mom decided to let me try skating because I mentioned I wanted to play hockey. She thought figure skates looked easier to use and let me try those

out first. It just took off from there and I&#39;ve been skating ever since.

Day in, day out—what keeps you motivated? First off, I don&#39;t think I know a single skater or athlete that doesn&#39;t want to attend the Olympics, so that is a powerful motivator. Personally, I love skating. I genuinely enjoying skating and every day is a new challenge for me—and I love those challenges. You have largely trained under Russian coaches and have been with Rafael Arutyunyan, also a Russian coach, since late 2011. Is

there something about the Russian style of training that makes sense to you? I began skating with a coach named Stephanee Grosscup and my mom decided she wanted me to work with a male coach named Karl Kover. He introduced me to the European-Russian technique and, because I was so young, this technique was the first technique that I learned. It’s grown on me and really works for me. Rafael is known as a jump specialist and you can churn out quads like crazy. Talk about what it was like for you to start doing quads to now being the ﬁrst U.S. men’s ﬁgure skater to do two clean quads in a short program and four clean quads in a long program? Quads were actually a relatively long process. Even when I first moved to Rafael, he saw the potential in my triples, so we began working on different exercises so that I was in the right place. As soon as I gained the strength and power, I was able to land my quads very quickly. Nationals was a great accomplishment for me. I&#39;m really happy I was able to do what I did. Timothy Goebel set the previous bar way back in 2002 when he did three quads in a freestyle program. What does that mean to you that you accomplished all of those quads and that you have set a record? Going into the event my goal wasn&#39;t to break records or anything along that line. I just wanted to do what I was capable of and I&#39;m proud that I was able to do that under pressure. Speaking of being under pressure, Rafael told me in a previous interview that he believes in a process where programs in practice are so diﬃcult that competition seems easy, thereby preparing his skaters for just about anything. Does this work for you? While this may be true in certain circumstances, competition is a very different scenario than practice. Judges, time, audience and nerves make the competition really different so it is very difficult to directly relate practice to competition.

Welcome to our May/June issue of PS Magazine! This issue is jam-packed with an array of articles for our coaches. Inside you will find a notice of our membership category changes, a preview of our upcoming Nationwide Seminars, the 2016 Honor Roll of Synchronized Skating Coaches, skating adventures with alpine skater Laura Kottlowski, a recap of the Synchronized Skating Championships, a final preview of the 2016 ISI/PSA Conferences & Trade Show, How to figure out your hockey players, a farewell article to outgoing PSA President Angie Riviello, and an interview with Nathan Chen. 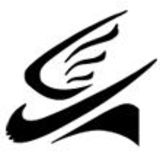