From Killing Fields to Learning Streets 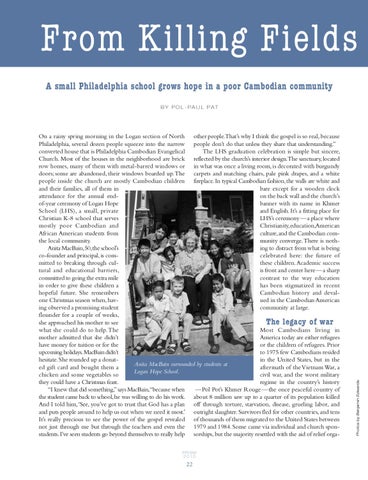 On a rainy spring morning in the Logan section of North other people.That’s why I think the gospel is so real, because Philadelphia, several dozen people squeeze into the narrow people don’t do that unless they share that understanding.” converted house that is Philadelphia Cambodian Evangelical The LHS graduation celebration is simple but sincere, Church. Most of the houses in the neighborhood are brick reflected by the church’s interior design.The sanctuary, located row homes, many of them with metal-barred windows or in what was once a living room, is decorated with burgundy doors; some are abandoned, their windows boarded up. The carpets and matching chairs, pale pink drapes, and a white people inside the church are mostly Cambodian children fireplace. In typical Cambodian fashion, the walls are white and and their families, all of them in bare except for a wooden clock attendance for the annual endon the back wall and the church’s of-year ceremony of Logan Hope banner with its name in Khmer School (LHS), a small, private and English. It’s a fitting place for Christian K-8 school that serves LHS’s ceremony — a place where mostly poor Cambodian and Christianity, education,American African American students from culture, and the Cambodian comthe local community. munity converge. There is nothAnita MacBain, 50, the school’s ing to distract from what is being co-founder and principal, is comcelebrated here: the future of mitted to breaking through culthese children. Academic success tural and educational barriers, is front and center here — a sharp committed to going the extra mile contrast to the way education in order to give these children a has been stigmatized in recent hopeful future. She remembers Cambodian history and devalone Christmas season when, havued in the Cambodian American ing observed a promising student community at large. flounder for a couple of weeks, she approached his mother to see The legacy of war what she could do to help. The Most Cambodians living in mother admitted that she didn’t America today are either refugees have money for tuition or for the or the children of refugees. Prior upcoming holidays. MacBain didn’t to 1975 few Cambodians resided hesitate. She rounded up a donatin the United States, but in the Anita MacBain surrounded by students at ed gift card and bought them a aftermath of the Vietnam War, a Logan Hope School. chicken and some vegetables so civil war, and the worst military they could have a Christmas feast. regime in the country’s history “I knew that did something,” says MacBain,“because when — Pol Pot’s Khmer Rouge — the once peaceful country of the student came back to school, he was willing to do his work. about 8 million saw up to a quarter of its population killed And I told him, ‘See, you’ve got to trust that God has a plan off through torture, starvation, disease, grueling labor, and and puts people around to help us out when we need it most.’ outright slaughter. Survivors fled for other countries, and tens It’s really precious to see the power of the gospel revealed of thousands of them migrated to the United States between not just through me but through the teachers and even the 1979 and 1984. Some came via individual and church sponstudents. I’ve seen students go beyond themselves to really help sorships, but the majority resettled with the aid of relief orgaPRISM 2010

From Killing Fields to Learning Streets

How a small school in inner-city Philadelphia is impacting the lives of Cambodian immigrant families. 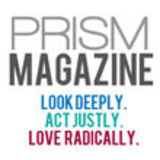