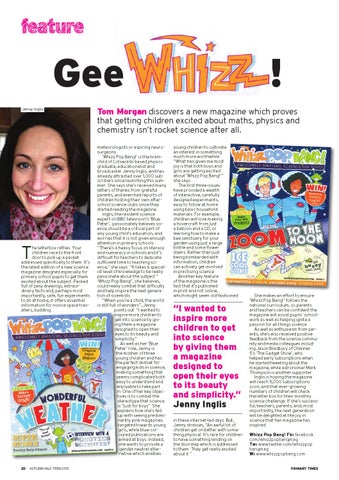 he letterbox rattles. Your children race to the front door to pick up a packet addressed specifically to them. It’s the latest edition of a new science magazine designed especially for primary school pupils to get them excited about the subject. Packed full of zany drawings, extraordinary facts and, perhaps most importantly, safe, fun experiments to do at home, it offers essential information for novice space travellers, budding

Tom Morgan discovers a new magazine which proves that getting children excited about maths, physics and chemistry isn’t rocket science after all. meteorologists or aspiring neurosurgeons. ‘Whizz Pop Bang!’ is the brainchild of Cotswolds-based physics graduate, educationalist and broadcaster Jenny Inglis, and has already attracted over 1,000 subscribers since launching this summer. She says she’s received many letters of thanks from grateful parents, and even had reports of children hosting their own afterschool science clubs since they started reading the magazine. Inglis, the resident science expert on BBC television’s ‘Blue Peter’, passionately believes science should be a critical part of any young child’s education, and worries that it is not given enough attention in primary schools. “There’s a heavy focus on literacy and numeracy in schools and it’s difficult for teachers to dedicate sufficient time to teaching science,” she says. “It takes a specialist level of knowledge to be really passionate about the subject.” ‘Whizz Pop Bang!’, she believes, could really combat that difficulty and help inspire the next generation of scientists. “When you’re a child, the world is still full of wonders”, Jenny points out. “I wanted to inspire more children to get into science by giving them a magazine designed to open their eyes to its beauty and simplicity.” As well as her ‘Blue Peter’ role, Jenny is the mother of three young children and has the perfect skillset for engaging kids in science, making something that seems complicated both easy to understand and enjoyable to take part in. One of her key objectives is to combat the stereotype that science is “just for boys”. She explains how she’s fed up with seeing predominantly pink magazines targeted towards young girls, while blue-coloured publications are aimed at boys. Instead, she wants to provide a gender neutral alternative which enables

young children to cultivate an interest in something much more worthwhile. “What has given me most joy is that both boys and girls are getting excited about ‘Whizz Pop Bang!’” she says. The first three issues have provided a wealth of interactive, carefully designed experiments, easy to follow at home using basic household materials. For example, children will love making a hovercraft from just a balloon and a CD, or learning how to make a bee sanctuary for your garden using just a large bottle and some flower stems. Rather than just being bombarded with information, children can actively get involved in practising science. Another key feature of the magazine is the fact that it’s published in print and not online, which might seem old-fashioned

“I wanted to inspire more children to get into science by giving them a magazine designed to open their eyes to its beauty and simplicity.” Jenny Inglis in these internet-led days. But, Jenny stresses, “An awful lot of children get on better with something physical. It’s rare for children to have something landing on the doorstep which is addressed to them. They get really excited about it.”

She makes an effort to ensure ‘Whizz Pop Bang!’ follows the national curriculum, so parents and teachers can be confident the magazine will assist pupils’ schoolwork as well as helping ignite a passion for all things science. As well as enthusiasm from parents, she’s also received positive feedback from the science community and media colleagues including Jason Bradbury of Channel 5’s ‘The Gadget Show’, who helped early subscriptions when he started tweeting about the magazine, while astronomer Mark Thompson is another supporter. Inglis is hoping the magazine will reach 5,000 subscriptions soon, and that ever-growing numbers of children will check the letter box for their monthly science challenge. If she’s successful, teachers, parents, and, most importantly, the next generation will be delighted at the joy in science that her magazine has inspired. Whizz Pop Bang! Fb: facebook. com/whizzpopbangmag Tw: www.twitter.com/whizzpop bangmag W: www.whizzpopbang.com PRIMARY TIMES