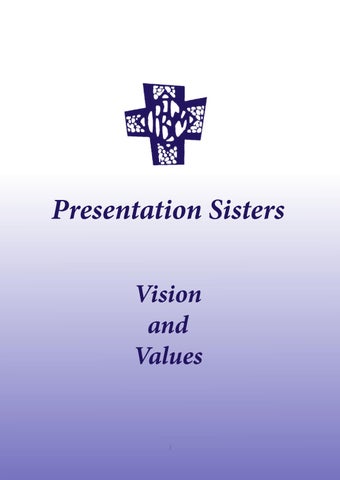 Introduction and Purpose of the booklet

We Presentation Sisters are a Religious Congregation, founded by Nano Nagle, committed to the service of the poor and marginalised. As a Catholic, International Congregation our purpose and desire in presenting this booklet, is to share something of our vision, our charism, and the core values that shape, influence and inform every aspect of our lives and our engagement in the dream of God for a more just and compassionate world. We use our many and diverse gifts in the service and care of humanity and the earth. This booklet is a flavour of who we are and what shapes the Presentation Way of Life, and we thank you for giving time to reading and reflecting on it.

STORY OF NANO NAGLE We share with you a brief snapshot of the life of a courageous and prophetic woman, whose life and actions radically impacted on the world, in a manner way beyond her imaginings. Honora Nagle was born in 1718, in Ballygriffin, Cork, Ireland. Nano, as she was known, was the eldest daughter of seven children born to Garret and Anne Nagle. The Penal Laws passed during the late seventeenth and early decades of the eighteenth century led to an Ireland that was totally suppressed. What followed was the evolution of two social classes among the Catholics: the small middle class who gradually gained their wealth from trading and manufacturing once their lands were taken. Nano belonged to this small middle class. The second group was a larger group. They were the poor - helpless, inarticulate, uneducated and living in a culture of abject poverty and misery. Because of the restrictions of the Penal Laws, Nanoâ&amp;#x20AC;&amp;#x2122;s early education was in the secret hedge schools and later she was smuggled out of Ireland to receive her higher education in Paris and Ypres.We know that Nano spent many years in Paris. She enjoyed Parisian life to the full. It is said that she had the unusual distinction of being presented at the court of Louis XV King of France. Later in life, she shared how difficult she found having to leave it all behind when she returned to Ireland. 3

It was on returning from an evening soiree in Paris, that Nano was awakened to the poverty so close to her, as she watched from her carriage window the poor people huddled at the chapel door in the early hours. In 1746 her father died. Nano and her sister Ann returned to live with their mother in Dublin. Here, she was brought face to face with the religious and social deprivation of the Irish people. Again, she was disturbed to the core of her being by the discovery that her sister Ann had disposed of a roll of silk to alleviate the poverty of a family she encountered in Dublin. These awakenings to the poor, and the subsequent death of both Ann and her mother, occasioned a radical change in her life. She left behind the fashionable world to which she had been so accustomed, entering Religious Life in France. However, her stay there was a troubled one.The cry of the poor of Cork disturbed her and their memories haunted her. Seeking advice from her spiritual director, she took one further daring step, and returned to Ireland to do what she could to change the lives of those made poor. Nano dared the unthinkable! At great risk both to herself and her family she provided education for the poor. Renting a small cabin, she gathered her first group of children around her. Here she taught the basics of their Catholic faith alongside reading, writing and arithmetic. Her schools rapidly expanded. She realised she needed to put this Divine enterprise on a solid footing.To facilitate this, she enlisted the help of the Ursuline Congregation in France. She used her monetary resources to establish a convent for the Ursuline Sisters in Cork. However, on their arrival in 1771, she discovered that the rule of enclosure prevented them from working in her schools throughout Cork City. Nonetheless, she did not withdraw her support from the Ursuline Congregation, but invited young women to work with her in her schools.

In December 24th 1775, three of these women joined with her in committing themselves to religious life. Initially, they were known as the Institute of the Charitable Instruction of the Sacred Heart of Jesus. Subsequent to her death, the Congregation was re-named as the Presentation of the Blessed Virgin Mary. Nano Nagle was a woman ablaze with passion for God and for humanity. Fired with this compassionate love of Jesus, she became in her time a voice for the voiceless, hope for the hopeless, a campaigner of human rights, a social reformer, a pioneer of education, and a bright light aflame in a very darkened world. She was fondly known as the ‘Lady of the Lantern’. Nano died on April 26th 1784.

“If I could be of service in saving souls in any part of the world, I would willingly do all in my power”. These words of Nano Nagle have inspired many people throughout the world. The flame of her lantern continues to shine today in a multiplicity of diverse and creative services across all five continents. Nano Nagle was declared Venerable by Pope Francis on October 31st 2013. The cause for her canonisation continues.

Charism Like all Congregations, Presentation has its own charism. What is charism? “Charism is the heart of the foundress aglow at one period in history, one that develops from age to age. Charism is a living passion for whatever dimension of Christ’s life, peace, truth, healing, mercy... is missing in our time.” (Joan Chittister Amended) Charism is always at the service of mission. The Presentation charism emanates from Nano’s charism, as expressed through her commitment to the education and care of the vulnerable and powerless and the relief of those exploited by unjust systems.

Values The values that we as a Presentation Congregation hold sacred determine and inform decisions we make and how we make them. Core values that guide us in our mission and in our day to day living are:

• Prayer and reflection. We take time to be still and to reflect.

• Education. We are passionate about innovative and creative lifelong learning.

• Justice. We respect the dignity of the human person and all of creation. 7

• Hospitality. We are open and welcoming to all faiths and cultures.

• Compassion. We strive to take special care of the most vulnerable.

The Mission of Jesus Jesus began his universal mission with his prophetic statement speaking in the words of the prophet Isaiah: “The Spirit of the Lord is upon me, because he has chosen me to bring the good news to the poor. He has sent me to proclaim liberty to the captives and recovery of sight to the blind; to set free the oppressed and to announce that the time has come when the Lord will save his people.” (Luke 4:18-19). Out of his prayer and communion with the Father, Jesus sought out those marginalised and rejected in the society of his day.

The Mission of Nano The call of Nano Nagle’s life was shaped by the same Spirit of the Lord which led her through uncertainty and failure to an ever greater understanding of her mission. That understanding enabled her to take steps to liberate the poor from ignorance and injustice.

Our Mission Today Our calling today is to continue Nanoâ&amp;#x20AC;&amp;#x2122;s commitment to the education and care of the vulnerable and powerless. We seek to participate in the unfolding mystery of God by fostering the values proclaimed in the life and mission of Jesus. In fidelity to the founding Spirit we respond creatively in the context of where we live and minister. The issues that preoccupied the energies of the heart and mind of Nano Nagle are not dissimilar to our time. Our prophetic voice is vitally important in our world today - who will speak if you donâ&amp;#x20AC;&amp;#x2122;t? Sr. Raphael Consedine, Presentation Sister, expresses well the call to us to continue living the vision of this prophetic woman in the following poem: Profile: Nano Nagle In the face of fear, she chose to be daring, In the face of anxiety, she chose to trust, In the face of impossibility, she chose to begin. To universal misery she opposed ministry to persons, To ignorance, knowledge, To disillusionment, tenacity of purpose, And to multiple vexations, singleness of heart. Faced with failure, she held fast to hope, Faced with death, she believed in a living future, And a programme for that future she gave in one word, Love.

Other commonly used Presentation Logos not already featured in this publication

The spread of the Congregation from the acorn to the oak tree.

Nano Nagle, known as Lady of the Lantern.

Our Constitutions, known as Our Way of Life

Our purpose and desire in presenting this booklet, is to share something of our vision, our charism, and the core values that shape, influence and inform every aspect of our lives and our engagement in the dream of God for a more just and compassionate world. 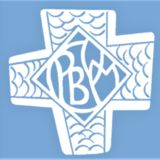