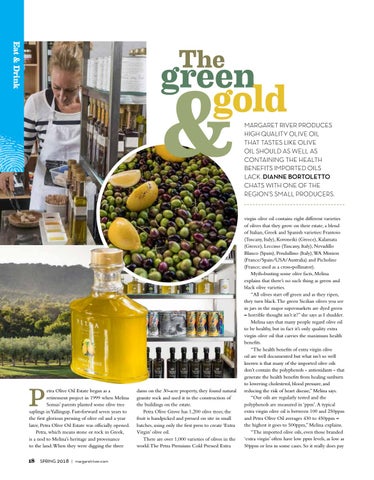 MARGARET RIVER PRODUCES HIGH QUALITY OLIVE OIL THAT TASTES LIKE OLIVE OIL SHOULD AS WELL AS CONTAINING THE HEALTH BENEFITS IMPORTED OILS LACK. DIANNE BORTOLETTO CHATS WITH ONE OF THE REGION’S SMALL PRODUCERS.

etra Olive Oil Estate began as a retirement project in 1999 when Melina Somas’ parents planted some olive tree saplings in Yallingup. Fast-forward seven years to the first glorious pressing of olive oil and a year later, Petra Olive Oil Estate was officially opened. Petra, which means stone or rock in Greek, is a nod to Melina’s heritage and provenance to the land. When they were digging the three

dams on the 30-acre property, they found natural granite rock and used it in the construction of the buildings on the estate. Petra Olive Grove has 1,200 olive trees; the fruit is handpicked and pressed on site in small batches, using only the first press to create ‘Extra Virgin’ olive oil. There are over 1,000 varieties of olives in the world. The Petra Premium Cold Pressed Extra

virgin olive oil contains eight different varieties of olives that they grow on their estate, a blend of Italian, Greek and Spanish varieties: Frantoio (Tuscany, Italy), Koroneiki (Greece), Kalamata (Greece), Leccino (Tuscany, Italy), Nevadillo Blanco (Spain), Pendullino (Italy), WA Mission (France/Spain/USA/Australia) and Picholine (France; used as a cross-pollinator). Myth-busting some olive facts, Melina explains that there’s no such thing as green and black olive varieties. “All olives start off green and as they ripen, they turn black. The green Sicilian olives you see in jars in the major supermarkets are dyed green – horrible thought isn’t it?” she says as I shudder. Melina says that many people regard olive oil to be healthy, but in fact it’s only quality extra virgin olive oil that carries the maximum health benefits. “The health benefits of extra virgin olive oil are well documented but what isn’t so well known is that many of the imported olive oils don’t contain the polyphenols - antioxidants - that generate the health benefits from healing sunburn to lowering cholesterol, blood pressure, and reducing the risk of heart disease,” Melina says. “Our oils are regularly tested and the polyphenols are measured in ‘ppm’. A typical extra virgin olive oil is between 100 and 250ppm and Petra Olive Oil averages 430 to 450ppm – the highest it goes to 500ppm,” Melina explains. “The imported olive oils, even those branded ‘extra virgin’ often have low ppm levels, as low as 50ppm or less in some cases. So it really does pay

Published on behalf of the MRBTA, start planning your spring adventures in the Margaret River region.

Published on behalf of the MRBTA, start planning your spring adventures in the Margaret River region.