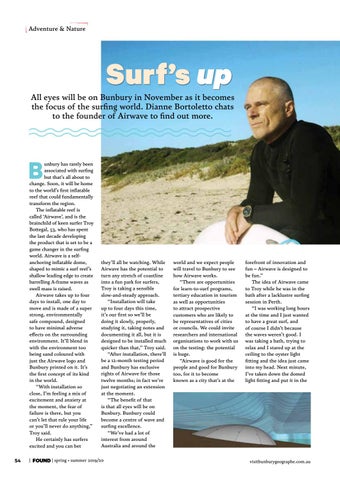 All eyes will be on Bunbury in November as it becomes the focus of the surfing world. Dianne Bortoletto chats to the founder of Airwave to find out more.

unbury has rarely been associated with surfing but that’s all about to change. Soon, it will be home to the world’s first inflatable reef that could fundamentally transform the region. The inflatable reef is called ‘Airwave’, and is the brainchild of keen surfer Troy Bottegal, 53, who has spent the last decade developing the product that is set to be a game changer in the surfing world. Airwave is a selfanchoring inflatable dome, shaped to mimic a surf reef’s shallow leading edge to create barrelling A-frame waves as swell mass is raised. Airwave takes up to four days to install, one day to move and is made of a super strong, environmentally safe compound, designed to have minimal adverse effects on the surrounding environment. It’ll blend in with the environment too being sand coloured with just the Airwave logo and Bunbury printed on it. It’s the first concept of its kind in the world. “With installation so close, I’m feeling a mix of excitement and anxiety at the moment, the fear of failure is there, but you can’t let that rule your life or you’ll never do anything,” Troy said. He certainly has surfers excited and you can bet

they’ll all be watching. While Airwave has the potential to turn any stretch of coastline into a fun park for surfers, Troy is taking a sensible slow-and-steady approach. “Installation will take up to four days this time, it’s our first so we’ll be doing it slowly, properly, studying it, taking notes and documenting it all, but it is designed to be installed much quicker than that,” Troy said. “After installation, there’ll be a 12-month testing period and Bunbury has exclusive rights of Airwave for those twelve months; in fact we’re just negotiating an extension at the moment. “The benefit of that is that all eyes will be on Bunbury. Bunbury could become a centre of wave and surfing excellence. “We’ve had a lot of interest from around Australia and around the

world and we expect people will travel to Bunbury to see how Airwave works. “There are opportunities for learn-to-surf programs, tertiary education in tourism as well as opportunities to attract prospective customers who are likely to be representatives of cities or councils. We could invite researchers and international organisations to work with us on the testing: the potential is huge. “Airwave is good for the people and good for Bunbury too, for it to become known as a city that’s at the

forefront of innovation and fun – Airwave is designed to be fun.” The idea of Airwave came to Troy while he was in the bath after a lacklustre surfing session in Perth. “I was working long hours at the time and I just wanted to have a great surf, and of course I didn’t because the waves weren’t good. I was taking a bath, trying to relax and I stared up at the ceiling to the oyster light fitting and the idea just came into my head. Next minute, I’ve taken down the domed light fitting and put it in the

Published on behalf of Visit Bunbury Geographe, Found Magazine helps you discover this beautiful part of the south west in WA. 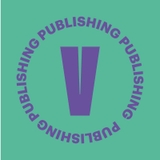