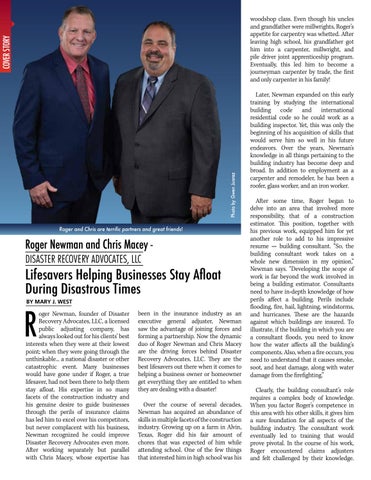 woodshop class. Even though his uncles and grandfather were millwrights, Roger’s appetite for carpentry was whetted. After leaving high school, his grandfather got him into a carpenter, millwright, and pile driver joint apprenticeship program. Eventually, this led him to become a journeyman carpenter by trade, the first and only carpenter in his family!

Roger and Chris are terrific partners and great friends!

oger Newman, founder of Disaster Recovery Advocates, LLC, a licensed public adjusting company, has always looked out for his clients’ best interests when they were at their lowest point; when they were going through the unthinkable... a national disaster or other catastrophic event. Many businesses would have gone under if Roger, a true lifesaver, had not been there to help them stay afloat. His expertise in so many facets of the construction industry and his genuine desire to guide businesses through the perils of insurance claims has led him to excel over his competitors, but never complacent with his business, Newman recognized he could improve Disaster Recovery Advocates even more. After working separately but parallel with Chris Macey, whose expertise has

been in the insurance industry as an executive general adjuster, Newman saw the advantage of joining forces and forming a partnership. Now the dynamic duo of Roger Newman and Chris Macey are the driving forces behind Disaster Recovery Advocates, LLC. They are the best lifesavers out there when it comes to helping a business owner or homeowner get everything they are entitled to when they are dealing with a disaster! Over the course of several decades, Newman has acquired an abundance of skills in multiple facets of the construction industry. Growing up on a farm in Alvin, Texas, Roger did his fair amount of chores that was expected of him while attending school. One of the few things that interested him in high school was his

Later, Newman expanded on this early training by studying the international building code and international residential code so he could work as a building inspector. Yet, this was only the beginning of his acquisition of skills that would serve him so well in his future endeavors. Over the years, Newman’s knowledge in all things pertaining to the building industry has become deep and broad. In addition to employment as a carpenter and remodeler, he has been a roofer, glass worker, and an iron worker. After some time, Roger began to delve into an area that involved more responsibility, that of a construction estimator. This position, together with his previous work, equipped him for yet another role to add to his impressive resume — building consultant. “So, the building consultant work takes on a whole new dimension in my opinion,” Newman says. “Developing the scope of work is far beyond the work involved in being a building estimator. Consultants need to have in-depth knowledge of how perils affect a building. Perils include flooding, fire, hail, lightning, windstorms, and hurricanes. These are the hazards against which buildings are insured. To illustrate, if the building in which you are a consultant floods, you need to know how the water affects all the building’s components. Also, when a fire occurs, you need to understand that it causes smoke, soot, and heat damage, along with water damage from the firefighting.” Clearly, the building consultant’s role requires a complex body of knowledge. When you factor Roger’s competence in this area with his other skills, it gives him a sure foundation for all aspects of the building industry. The consultant work eventually led to training that would prove pivotal. In the course of his work, Roger encountered claims adjusters and felt challenged by their knowledge. 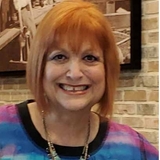