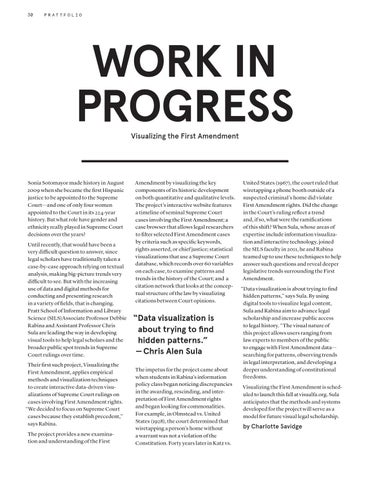 Sonia Sotomayor made history in August 2009 when she became the first Hispanic justice to be appointed to the Supreme Court—and one of only four women appointed to the Court in its 224-year history. But what role have gender and ethnicity really played in Supreme Court decisions over the years? Until recently, that would have been a very difficult question to answer, since legal scholars have traditionally taken a case-by-case approach relying on textual analysis, making big-picture trends very difficult to see. But with the increasing use of data and digital methods for conducting and presenting research in a variety of fields, that is changing. Pratt School of Information and Library Science (SILS)Associate Professor Debbie Rabina and Assistant Professor Chris Sula are leading the way in developing visual tools to help legal scholars and the broader public spot trends in Supreme Court rulings over time. Their first such project, Visualizing the First Amendment, applies empirical methods and visualization techniques to create interactive data-driven visualizations of Supreme Court rulings on cases involving First Amendment rights. “We decided to focus on Supreme Court cases because they establish precedent,” says Rabina. The project provides a new examination and understanding of the First

Amendment by visualizing the key components of its historic development on both quantitative and qualitative levels. The project’s interactive website features a timeline of seminal Supreme Court cases involving the First Amendment; a case browser that allows legal researchers to filter selected First Amendment cases by criteria such as specific keywords, rights asserted, or chief justice; statistical visualizations that use a Supreme Court database, which records over 60 variables on each case, to examine patterns and trends in the history of the Court; and a citation network that looks at the conceptual structure of the law by visualizing citations between Court opinions.

“ Data visualization is about trying to find hidden patterns.” — Chris Alen Sula The impetus for the project came about when students in Rabina’s information policy class began noticing discrepancies in the awarding, rescinding, and interpretation of First Amendment rights and began looking for commonalities. For example, in Olmstead vs. United States (1928), the court determined that wiretapping a person’s home without a warrant was not a violation of the Constitution. Forty years later in Katz vs.

United States (1967), the court ruled that wiretapping a phone booth outside of a suspected criminal’s home did violate First Amendment rights. Did the change in the Court’s ruling reflect a trend and, if so, what were the ramifications of this shift? When Sula, whose areas of expertise include information visualization and interactive technology, joined the SILS faculty in 2011, he and Rabina teamed up to use these techniques to help answer such questions and reveal deeper legislative trends surrounding the First Amendment. “Data visualization is about trying to find hidden patterns,” says Sula. By using digital tools to visualize legal content, Sula and Rabina aim to advance legal scholarship and increase public access to legal history. “The visual nature of this project allows users ranging from law experts to members of the public to engage with First Amendment data— searching for patterns, observing trends in legal interpretation, and developing a deeper understanding of constitutional freedoms. Visualizing the First Amendment is scheduled to launch this fall at visualfa.org. Sula anticipates that the methods and systems developed for the project will serve as a model for future visual legal scholarship.

This issue examines some of the ways Pratt artists and designers are using their skills to transform statistics into meaningful stories--and, in turn, how data itself is inspiring new creative works. 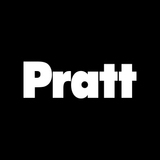