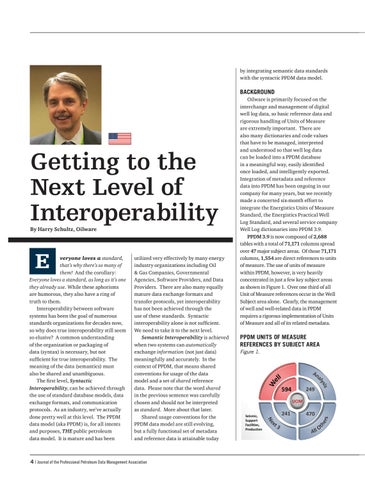 veryone loves a standard, that’s why there’s so many of them! And the corollary: Everyone loves a standard, as long as it’s one they already use. While these aphorisms are humorous, they also have a ring of truth to them. Interoperability between software systems has been the goal of numerous standards organizations for decades now, so why does true interoperability still seem so elusive? A common understanding of the organization or packaging of data (syntax) is necessary, but not sufficient for true interoperability. The meaning of the data (semantics) must also be shared and unambiguous. The first level, Syntactic Interoperability, can be achieved through the use of standard database models, data exchange formats, and communication protocols. As an industry, we’ve actually done pretty well at this level. The PPDM data model (aka PPDM) is, for all intents and purposes, THE public petroleum data model. It is mature and has been

utilized very effectively by many energy industry organizations including Oil &amp; Gas Companies, Governmental Agencies, Software Providers, and Data Providers. There are also many equally mature data exchange formats and transfer protocols, yet interoperability has not been achieved through the use of these standards. Syntactic interoperability alone is not sufficient. We need to take it to the next level. Semantic Interoperability is achieved when two systems can automatically exchange information (not just data) meaningfully and accurately. In the context of PPDM, that means shared conventions for usage of the data model and a set of shared reference data. Please note that the word shared in the previous sentence was carefully chosen and should not be interpreted as standard. More about that later. Shared usage conventions for the PPDM data model are still evolving, but a fully functional set of metadata and reference data is attainable today

Oilware is primarily focused on the interchange and management of digital well log data, so basic reference data and rigorous handling of Units of Measure are extremely important. There are also many dictionaries and code values that have to be managed, interpreted and understood so that well log data can be loaded into a PPDM database in a meaningful way, easily identified once loaded, and intelligently exported. Integration of metadata and reference data into PPDM has been ongoing in our company for many years, but we recently made a concerted six-month effort to integrate the Energistics Units of Measure Standard, the Energistics Practical Well Log Standard, and several service company Well Log dictionaries into PPDM 3.9. PPDM 3.9 is now composed of 2,688 tables with a total of 71,171 columns spread over 47 major subject areas. Of those 71,171 columns, 1,554 are direct references to units of measure. The use of units of measure within PPDM, however, is very heavily concentrated in just a few key subject areas as shown in Figure 1. Over one third of all Unit of Measure references occur in the Well Subject area alone. Clearly, the management of well and well-related data in PPDM requires a rigorous implementation of Units of Measure and all of its related metadata.