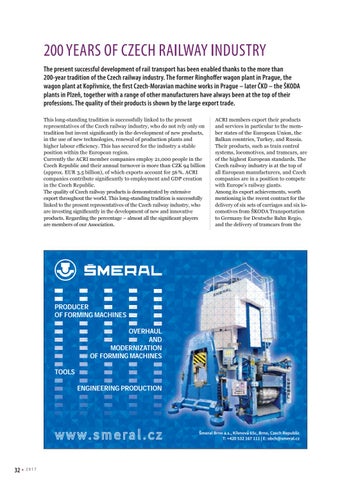 ACRI members export their products and services in particular to the member states of the European Union, the Balkan countries, Turkey, and Russia. Their products, such as train control systems, locomotives, and tramcars, are of the highest European standards. The Czech railway industry is at the top of all European manufacturers, and Czech companies are in a position to compete with Europe’s railway giants. Among its export achievements, worth mentioning is the recent contract for the delivery of six sets of carriages and six locomotives from ŠKODA Transportation to Germany for Deutsche Bahn Regio, and the delivery of tramcars from the