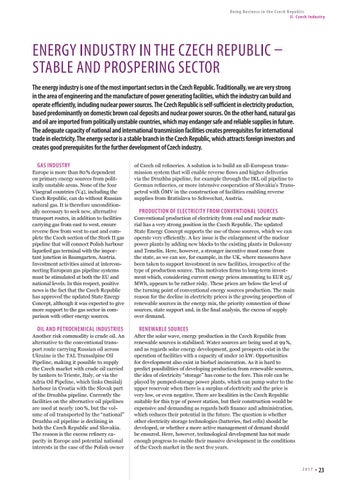 ENERGY INDUSTRY IN THE CZECH REPUBLIC  STABLE AND PROSPERING SECTOR The energy industry is one of the most important sectors in the Czech Republic. Traditionally, we are very strong in the area of engineering and the manufacture of power generating facilities, which the industry can build and operate eﬃciently, including nuclear power sources. The Czech Republic is self-suﬃcient in electricity production, based predominantly on domestic brown coal deposits and nuclear power sources. On the other hand, natural gas and oil are imported from politically unstable countries, which may endanger safe and reliable supplies in future. The adequate capacity of national and international transmission facilities creates prerequisites for international trade in electricity. The energy sector is a stable branch in the Czech Republic, which attracts foreign investors and creates good prerequisites for the further development of Czech industry. GAS INDUSTRY Europe is more than 80 % dependent on primary energy sources from politically unstable areas. None of the four Visegrad countries (V4), including the Czech Republic, can do without Russian natural gas. It is therefore unconditionally necessary to seek new, alternative transport routes, in addition to facilities carrying gas from east to west, ensure reverse flow from west to east and complete the Czech section of the Stork II gas pipeline that will connect Polish harbour liquefied gas terminal with the important junction in Baumgarten, Austria. Investment activities aimed at interconnecting European gas pipeline systems must be stimulated at both the EU and national levels. In this respect, positive news is the fact that the Czech Republic has approved the updated State Energy Concept, although it was expected to give more support to the gas sector in comparison with other energy sources.

OIL AND PETROCHEMICAL INDUSTRIES Another risk commodity is crude oil. An alternative to the conventional transport route carrying Russian oil across Ukraine is the TAL Transalpine Oil Pipeline, making it possible to supply the Czech market with crude oil carried by tankers to Trieste, Italy, or via the Adria Oil Pipeline, which links Omišalj harbour in Croatia with the Slovak part of the Druzhba pipeline. Currently the facilities on the alternative oil pipelines are used at nearly 100 %, but the volume of oil transported by the “national” Druzhba oil pipeline is declining in both the Czech Republic and Slovakia. The reason is the excess refinery capacity in Europe and potential national interests in the case of the Polish owner

of Czech oil refineries. A solution is to build an all-European transmission system that will enable reverse flows and higher deliveries via the Druzhba pipeline, for example through the IKL oil pipeline to German refineries, or more intensive cooperation of Slovakia’s Transpetrol with ÖMV in the construction of facilities enabling reverse supplies from Bratislava to Schwechat, Austria.

PRODUCTION OF ELECTRICITY FROM CONVENTIONAL SOURCES Conventional production of electricity from coal and nuclear material has a very strong position in the Czech Republic. The updated State Energy Concept supports the use of those sources, which we can operate very eﬃciently. A key issue is the enlargement of the nuclear power plants by adding new blocks to the existing plants in Dukovany and Temelín. Here, however, a stronger incentive must come from the state, as we can see, for example, in the UK, where measures have been taken to support investment in new facilities, irrespective of the type of production source. This motivates firms to long-term investment which, considering current energy prices amounting to EUR 25/ MWh, appears to be rather risky. These prices are below the level of the turning point of conventional energy sources production. The main reason for the decline in electricity prices is the growing proportion of renewable sources in the energy mix, the priority connection of those sources, state support and, in the final analysis, the excess of supply over demand.

RENEWABLE SOURCES After the solar wave, energy production in the Czech Republic from renewable sources is stabilised. Water sources are being used at 99 %, and as regards solar energy development, good prospects exist in the operation of facilities with a capacity of under 10 kW. Opportunities for development also exist in biofuel incineration. As it is hard to predict possibilities of developing production from renewable sources, the idea of electricity “storage” has come to the fore. This role can be played by pumped-storage power plants, which can pump water to the upper reservoir when there is a surplus of electricity and the price is very low, or even negative. There are localities in the Czech Republic suitable for this type of power station, but their construction would be expensive and demanding as regards both finance and administration, which reduces their potential in the future. The question is whether other electricity storage technologies (batteries, fuel cells) should be developed, or whether a more active management of demand should be ensured. Here, however, technological development has not made enough progress to enable their massive development in the conditions of the Czech market in the next five years.