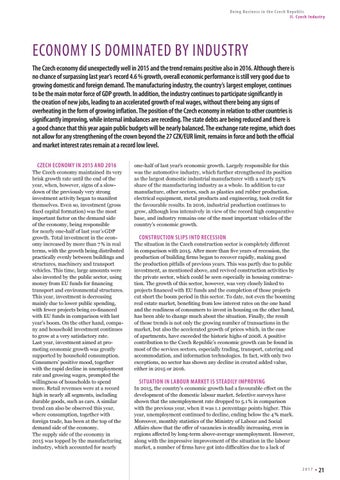 ECONOMY IS DOMINATED BY INDUSTRY The Czech economy did unexpectedly well in 2015 and the trend remains positive also in 2016. Although there is no chance of surpassing last year’s record 4.6 % growth, overall economic performance is still very good due to growing domestic and foreign demand. The manufacturing industry, the country’s largest employer, continues to be the main motor force of GDP growth. In addition, the industry continues to participate signiﬁcantly in the creation of new jobs, leading to an accelerated growth of real wages, without there being any signs of overheating in the form of growing inﬂation. The position of the Czech economy in relation to other countries is signiﬁcantly improving, while internal imbalances are receding. The state debts are being reduced and there is a good chance that this year again public budgets will be nearly balanced. The exchange rate regime, which does not allow for any strengthening of the crown beyond the 27 CZK/EUR limit, remains in force and both the oﬃcial and market interest rates remain at a record low level. CZECH ECONOMY IN 2015 AND 2016 The Czech economy maintained its very brisk growth rate until the end of the year, when, however, signs of a slowdown of the previously very strong investment activity began to manifest themselves. Even so, investment (gross fixed capital formation) was the most important factor on the demand side of the economy, being responsible for nearly one-half of last year´s GDP growth. Total investment in the economy increased by more than 7 % in real terms, with the growth being distributed practically evenly between buildings and structures, machinery and transport vehicles. This time, large amounts were also invested by the public sector, using money from EU funds for financing transport and environmental structures. This year, investment is decreasing mainly due to lower public spending, with fewer projects being co-financed with EU funds in comparison with last year’s boom. On the other hand, company and household investment continues to grow at a very satisfactory rate. Last year, investment aimed at promoting economic growth was greatly supported by household consumption. Consumers’ positive mood, together with the rapid decline in unemployment rate and growing wages, prompted the willingness of households to spend more. Retail revenues were at a record high in nearly all segments, including durable goods, such as cars. A similar trend can also be observed this year, where consumption, together with foreign trade, has been at the top of the demand side of the economy. The supply side of the economy in 2015 was topped by the manufacturing industry, which accounted for nearly

one-half of last year’s economic growth. Largely responsible for this was the automotive industry, which further strengthened its position as the largest domestic industrial manufacturer with a nearly 25 % share of the manufacturing industry as a whole. In addition to car manufacture, other sectors, such as plastics and rubber production, electrical equipment, metal products and engineering, took credit for the favourable results. In 2016, industrial production continues to grow, although less intensively in view of the record high comparative base, and industry remains one of the most important vehicles of the country’s economic growth.

CONSTRUCTION SLIPS INTO RECESSION The situation in the Czech construction sector is completely diﬀerent in comparison with 2015. After more than five years of recession, the production of building firms began to recover rapidly, making good the production pitfalls of previous years. This was partly due to public investment, as mentioned above, and revived construction activities by the private sector, which could be seen especially in housing construction. The growth of this sector, however, was very closely linked to projects financed with EU funds and the completion of those projects cut short the boom period in this sector. To date, not even the booming real estate market, benefiting from low interest rates on the one hand and the readiness of consumers to invest in housing on the other hand, has been able to change much about the situation. Finally, the result of those trends is not only the growing number of transactions in the market, but also the accelerated growth of prices which, in the case of apartments, have exceeded the historic highs of 2008. A positive contribution to the Czech Republic’s economic growth can be found in most of the services sectors, especially trading, transport, catering and accommodation, and information technologies. In fact, with only two exceptions, no sector has shown any decline in created added value, either in 2015 or 2016.

SITUATION IN LABOUR MARKET IS STEADILY IMPROVING In 2015, the country’s economic growth had a favourable eﬀect on the development of the domestic labour market. Selective surveys have shown that the unemployment rate dropped to 5.1 % in comparison with the previous year, when it was 1.1 percentage points higher. This year, unemployment continued to decline, ending below the 4 % mark. Moreover, monthly statistics of the Ministry of Labour and Social Aﬀairs show that the oﬀer of vacancies is steadily increasing, even in regions aﬀected by long-term above-average unemployment. However, along with the impressive improvement of the situation in the labour market, a number of firms have got into diﬃculties due to a lack of