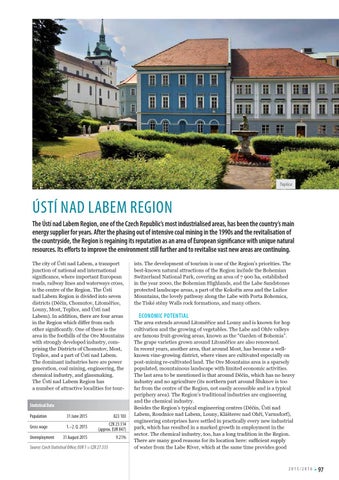 ÚSTÍ NAD LABEM REGION The Ústí nad Labem Region, one of the Czech Republic’s most industrialised areas, has been the country’s main energy supplier for years. After the phasing out of intensive coal mining in the 1990s and the revitalisation of the countryside, the Region is regaining its reputation as an area of European significance with unique natural resources. Its efforts to improve the environment still further and to revitalise vast new areas are continuing. The city of Ústí nad Labem, a transport junction of national and international signiﬁcance, where important European roads, railway lines and waterways cross, is the centre of the Region. The Ústí nad Labem Region is divided into seven districts (Děčín, Chomutov, Litoměřice, Louny, Most, Teplice, and Ústí nad Labem). In addition, there are four areas in the Region which differ from each other signiﬁcantly. One of these is the area in the foothills of the Ore Mountains with strongly developed industry, comprising the Districts of Chomutov, Most, Teplice, and a part of Ústí nad Labem. The dominant industries here are power generation, coal mining, engineering, the chemical industry, and glassmaking. The Ústí nad Labem Region has a number of attractive localities for tourStatistical Data Population Gross wage Unemployment

ists. The development of tourism is one of the Region’s priorities. The best-known natural attractions of the Region include the Bohemian Switzerland National Park, covering an area of 7 900 ha, established in the year 2000, the Bohemian Highlands, and the Labe Sandstones protected landscape areas, a part of the Kokořín area and the Lužice Mountains, the lovely pathway along the Labe with Porta Bohemica, the Tiské stěny Walls rock formations, and many others.

ECONOMIC POTENTIAL The area extends around Litoměřice and Louny and is known for hop cultivation and the growing of vegetables. The Labe and Ohře valleys are famous fruit-growing areas, known as the “Garden of Bohemia”. The grape varieties grown around Litoměřice are also renowned. In recent years, another area, that around Most, has become a wellknown vine-growing district, where vines are cultivated especially on post-mining re-cultivated land. The Ore Mountains area is a sparsely populated, mountainous landscape with limited economic activities. The last area to be mentioned is that around Děčín, which has no heavy industry and no agriculture (its northern part around Šluknov is too far from the centre of the Region, not easily accessible and is a typical periphery area). The Region’s traditional industries are engineering and the chemical industry. Besides the Region’s typical engineering centres (Děčín, Ústí nad Labem, Roudnice nad Labem, Louny, Klášterec nad Ohří, Varnsdorf), engineering enterprises have settled in practically every new industrial park, which has resulted in a marked growth in employment in the sector. The chemical industry, too, has a long tradition in the Region. There are many good reasons for its location here: sufﬁcient supply of water from the Labe River, which at the same time provides good