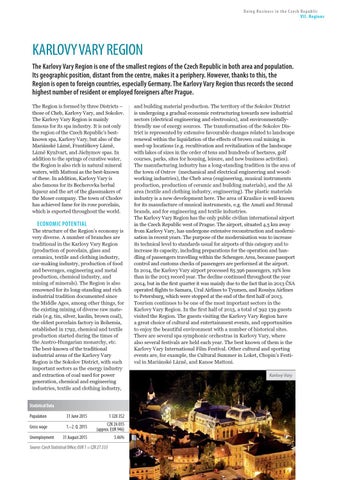 KARLOVY VARY REGION The Karlovy Vary Region is one of the smallest regions of the Czech Republic in both area and population. Its geographic position, distant from the centre, makes it a periphery. However, thanks to this, the Region is open to foreign countries, especially Germany. The Karlovy Vary Region thus records the second highest number of resident or employed foreigners after Prague. The Region is formed by three Districts – those of Cheb, Karlovy Vary, and Sokolov. The Karlovy Vary Region is mainly famous for its spa industry. It is not only the region of the Czech Republic’s bestknown spa, Karlovy Vary, but also of the Mariánské Lázně, Františkovy Lázně, Lázně Kynžvart, and Jáchymov spas. In addition to the springs of curative water, the Region is also rich in natural mineral waters, with Mattoni as the best-known of these. In addition, Karlovy Vary is also famous for its Becherovka herbal liqueur and the art of the glassmakers of the Moser company. The town of Chodov has achieved fame for its rose porcelain, which is exported throughout the world.

ECONOMIC POTENTIAL The structure of the Region’s economy is very diverse. A number of branches are traditional in the Karlovy Vary Region (production of porcelain, glass and ceramics, textile and clothing industry, car-making industry, production of food and beverages, engineering and metal production, chemical industry, and mining of minerals). The Region is also renowned for its long-standing and rich industrial tradition documented since the Middle Ages, among other things, for the existing mining of diverse raw materials (e.g. tin, silver, kaolin, brown coal), the oldest porcelain factory in Bohemia, established in 1792, chemical and textile production started during the times of the Austro-Hungarian monarchy, etc. The best-known of the traditional industrial areas of the Karlovy Vary Region is the Sokolov District, with such important sectors as the energy industry and extraction of coal used for power generation, chemical and engineering industries, textile and clothing industry, Statistical Data Population Gross wage Unemployment

and building material production. The territory of the Sokolov District is undergoing a gradual economic restructuring towards new industrial sectors (electrical engineering and electronics), and environmentallyfriendly use of energy sources. The transformation of the Sokolov District is represented by extensive favourable changes related to landscape renewal within the liquidation of the effects of brown coal mining in used-up locations (e.g. recultivation and revitalisation of the landscape with lakes of sizes in the order of tens and hundreds of hectares, golf courses, parks, sites for housing, leisure, and new business activities). The manufacturing industry has a long-standing tradition in the area of the town of Ostrov (mechanical and electrical engineering and woodworking industries), the Cheb area (engineering, musical instruments production, production of ceramic and building materials), and the Aš area (textile and clothing industry, engineering). The plastic materials industry is a new development here. The area of Kraslice is well-known for its manufacture of musical instruments, e.g. the Amati and Strunal brands, and for engineering and textile industries. The Karlovy Vary Region has the only public civilian international airport in the Czech Republic west of Prague. The airport, situated 4.5 km away from Karlovy Vary, has undergone extensive reconstruction and modernisation in recent years. The purpose of the modernisation was to increase its technical level to standards usual for airports of this category and to increase its capacity, including preparations for the operation and handling of passengers travelling within the Schengen Area, because passport control and customs checks of passengers are performed at the airport. In 2014, the Karlovy Vary airport processed 85 596 passengers, 19% less than in the 2013 record year. The decline continued throughout the year 2014, but in the ﬁrst quarter it was mainly due to the fact that in 2013 ČSA operated ﬂights to Samara, Ural Airlines to Tyumen, and Rossiya Airlines to Petersburg, which were stopped at the end of the ﬁrst half of 2013. Tourism continues to be one of the most important sectors in the Karlovy Vary Region. In the ﬁrst half of 2015, a total of 392 139 guests visited the Region. The guests visiting the Karlovy Vary Region have a great choice of cultural and entertainment events, and opportunities to enjoy the beautiful environment with a number of historical sites. There are several spa symphonic orchestras in Karlovy Vary, where also several festivals are held each year. The best known of them is the Karlovy Vary International Film Festival. Other cultural and sporting events are, for example, the Cultural Summer in Loket, Chopin’s Festival in Mariánské Lázně, and Kanoe Mattoni. Karlovy Vary