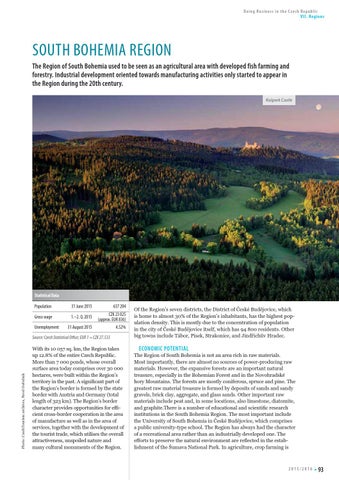 SOUTH BOHEMIA REGION The Region of South Bohemia used to be seen as an agricultural area with developed fish farming and forestry. Industrial development oriented towards manufacturing activities only started to appear in the Region during the 20th century. Kašperk Castle

With its 10 057 sq. km, the Region takes up 12.8% of the entire Czech Republic. More than 7 000 ponds, whose overall surface area today comprises over 30 000 hectares, were built within the Region’s territory in the past. A signiﬁcant part of the Region’s border is formed by the state border with Austria and Germany (total length of 323 km). The Region’s border character provides opportunities for efﬁcient cross-border cooperation in the area of manufacture as well as in the area of services, together with the development of the tourist trade, which utilises the overall attractiveness, unspoiled nature and many cultural monuments of the Region.

The Region of South Bohemia is not an area rich in raw materials. Most importantly, there are almost no sources of power-producing raw materials. However, the expansive forests are an important natural treasure, especially in the Bohemian Forest and in the Novohradské hory Mountains. The forests are mostly coniferous, spruce and pine. The greatest raw material treasure is formed by deposits of sands and sandy gravels, brick clay, aggregate, and glass sands. Other important raw materials include peat and, in some locations, also limestone, diatomite, and graphite.There is a number of educational and scientiﬁc research institutions in the South Bohemia Region. The most important include the University of South Bohemia in České Budějovice, which comprises a public university-type school. The Region has always had the character of a recreational area rather than an industrially developed one. The efforts to preserve the natural environment are reﬂected in the establishment of the Šumava National Park. In agriculture, crop farming is