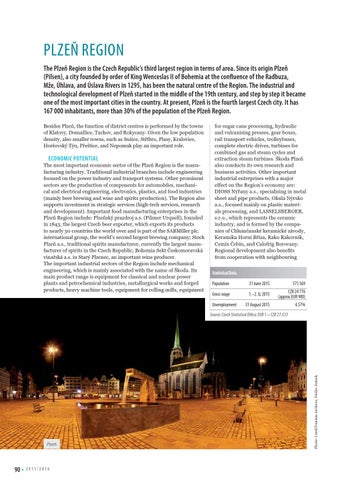 PLZEŇ REGION The Plzeň Region is the Czech Republic’s third largest region in terms of area. Since its origin Plzeň (Pilsen), a city founded by order of King Wenceslas II of Bohemia at the confluence of the Radbuza, Mže, Úhlava, and Úslava Rivers in 1295, has been the natural centre of the Region. The industrial and technological development of Plzeň started in the middle of the 19th century, and step by step it became one of the most important cities in the country. At present, Plzeň is the fourth largest Czech city. It has 167 000 inhabitants, more than 30% of the population of the Plzeň Region. Besides Plzeň, the function of district centres is performed by the towns of Klatovy, Domažlice, Tachov, and Rokycany. Given the low population density, also smaller towns, such as Sušice, Stříbro, Plasy, Kralovice, Horšovský Týn, Přeštice, and Nepomuk play an important role.

ECONOMIC POTENTIAL The most important economic sector of the Plzeň Region is the manufacturing industry. Traditional industrial branches include engineering focused on the power industry and transport systems. Other prominent sectors are the production of components for automobiles, mechanical and electrical engineering, electronics, plastics, and food industries (mainly beer brewing and wine and spirits production). The Region also supports investment in strategic services (high-tech services, research and development). Important food manufacturing enterprises in the Plzeň Region include: Plzeňský prazdroj a.s. (Pilsner Urquell), founded in 1843, the largest Czech beer exporter, which exports its products to nearly 50 countries the world over and is part of the SABMiller plc. international group, the world’s second largest brewing company; Stock Plzeň a.s., traditional spirits manufacturer, currently the largest manufacturer of spirits in the Czech Republic; Bohemia Sekt Českomoravská vinařská a.s. in Starý Plzenec, an important wine producer. The important industrial sectors of the Region include mechanical engineering, which is mainly associated with the name of Škoda. Its main product range is equipment for classical and nuclear power plants and petrochemical industries, metallurgical works and forged products, heavy machine tools, equipment for rolling mills, equipment