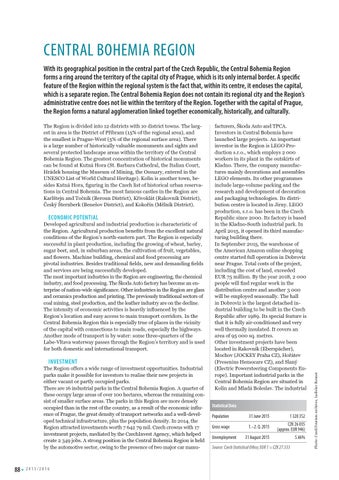 The Region is divided into 12 districts with 10 district towns. The largest in area is the District of Příbram (15% of the regional area), and the smallest is Prague-West (5% of the regional surface area). There is a large number of historically valuable monuments and sights and several protected landscape areas within the territory of the Central Bohemia Region. The greatest concentration of historical monuments can be found at Kutná Hora (St. Barbara Cathedral, the Italian Court, Hrádek housing the Museum of Mining, the Ossuary, entered in the UNESCO List of World Cultural Heritage). Kolín is another town, besides Kutná Hora, ﬁguring in the Czech list of historical urban reservations in Central Bohemia. The most famous castles in the Region are Karlštejn and Točník (Beroun District), Křivoklát (Rakovník District), Český Šternberk (Benešov District), and Kokořín (Mělník District).

ECONOMIC POTENTIAL Developed agricultural and industrial production is characteristic of the Region. Agricultural production beneﬁts from the excellent natural conditions of the Region’s north-eastern part. The Region is especially successful in plant production, including the growing of wheat, barley, sugar beet, and, in suburban areas, the cultivation of fruit, vegetables, and ﬂowers. Machine building, chemical and food processing are pivotal industries. Besides traditional ﬁelds, new and demanding ﬁelds and services are being successfully developed. The most important industries in the Region are engineering, the chemical industry, and food processing. The Škoda Auto factory has become an enterprise of nation-wide signiﬁcance. Other industries in the Region are glass and ceramics production and printing. The previously traditional sectors of coal mining, steel production, and the leather industry are on the decline. The intensity of economic activities is heavily inﬂuenced by the Region’s location and easy access to main transport corridors. In the Central Bohemia Region this is especially true of places in the vicinity of the capital with connections to main roads, especially the highways. Another mode of transport is by water: some three-quarters of the Labe-Vltava waterway passes through the Region’s territory and is used for both domestic and international transport.

INVESTMENT The Region offers a wide range of investment opportunities. Industrial parks make it possible for investors to realise their new projects in either vacant or partly occupied parks. There are 16 industrial parks in the Central Bohemia Region. A quarter of these occupy large areas of over 100 hectares, whereas the remaining consist of smaller surface areas. The parks in this Region are more densely occupied than in the rest of the country, as a result of the economic inﬂuence of Prague, the great density of transport networks and a well-developed technical infrastructure, plus the population density. In 2014, the Region attracted investments worth 7 642 79 mil. Czech crowns with 17 investment projects, mediated by the CzechInvest Agency, which helped create 2 349 jobs. A strong position in the Central Bohemia Region is held by the automotive sector, owing to the presence of two major car manu-

facturers, Škoda Auto and TPCA. Investors in Central Bohemia have launched large projects. An important investor in the Region is LEGO Production s.r.o., which employs 2 000 workers in its plant in the outskirts of Kladno. There, the company manufactures mainly decorations and assembles LEGO elements. Its other programmes include large-volume packing and the research and development of decoration and packaging technologies. Its distribution centre is located in Jirny. LEGO production, s.r.o. has been in the Czech Republic since 2000. Its factory is based in the Kladno-South industrial park. In April 2015, it opened its third manufacturing building there. In September 2015, the warehouse of the American Amazon online shopping centre started full operation in Dobrovíz near Prague. Total costs of the project, including the cost of land, exceeded EUR 75 million. By the year 2018, 2 000 people will ﬁnd regular work in the distribution centre and another 3 000 will be employed seasonally. The hall in Dobrovíz is the largest detached industrial building to be built in the Czech Republic after 1989. Its special feature is that it is fully air-conditioned and very well thermally insulated. It covers an area of 95 000 sq. metres. Other investment projects have been located in Rakovník (Eberspächer), Mochov (JOCKEY Praha CZ), Hořátev (Fresenius Hemocare CZ), and Slaný (Electric Powersteering Components Europe). Important industrial parks in the Central Bohemia Region are situated in Kolín and Mladá Boleslav. The industrial Statistical Data Population Gross wage Unemployment

With its geographical position in the central part of the Czech Republic, the Central Bohemia Region forms a ring around the territory of the capital city of Prague, which is its only internal border. A specific feature of the Region within the regional system is the fact that, within its centre, it encloses the capital, which is a separate region. The Central Bohemia Region does not contain its regional city and the Region’s administrative centre does not lie within the territory of the Region. Together with the capital of Prague, the Region forms a natural agglomeration linked together economically, historically, and culturally.