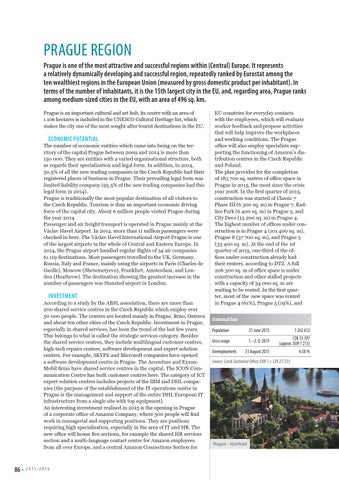 PRAGUE REGION Prague is one of the most attractive and successful regions within (Central) Europe. It represents a relatively dynamically developing and successful region, repeatedly ranked by Eurostat among the ten wealthiest regions in the European Union (measured by gross domestic product per inhabitant). In terms of the number of inhabitants, it is the 15th largest city in the EU, and, regarding area, Prague ranks among medium-sized cities in the EU, with an area of 496 sq. km. Prague is an important cultural and art hub, its centre with an area of 1 106 hectares is included in the UNESCO Cultural Heritage list, which makes the city one of the most sought-after tourist destinations in the EU.

ECONOMIC POTENTIAL The number of economic entities which came into being on the territory of the capital Prague between 2009 and 2014 is more than 150 000. They are entities with a varied organisational structure, both as regards their specialisation and legal form. In addition, in 2014, 50.5% of all the new trading companies in the Czech Republic had their registered places of business in Prague. Their prevailing legal form was limited liability company (95.5% of the new trading companies had this legal form in 2014). Prague is traditionally the most popular destination of all visitors to the Czech Republic. Tourism is thus an important economic driving force of the capital city. About 6 million people visited Prague during the year 2014. Passenger and air freight transport is operated in Prague mainly at the Václav Havel Airport. In 2014, more than 11 million passengers were checked in here. The Václav Havel International Airport Prague is one of the largest airports in the whole of Central and Eastern Europe. In 2014, the Prague airport handled regular ﬂights of 54 air companies to 119 destinations. Most passengers travelled to the UK, Germany, Russia, Italy and France, mainly using the airports in Paris (Charles de Gaulle), Moscow (Sheremetyevo), Frankfurt, Amsterdam, and London (Heathrow). The destination showing the greatest increase in the number of passengers was Stansted airport in London.

INVESTMENT According to a study by the ABSL association, there are more than 200 shared service centres in the Czech Republic which employ over 50 000 people. The centres are located mainly in Prague, Brno, Ostrava and about ten other cities of the Czech Republic. Investment in Prague, especially in shared services, has been the trend of the last few years. This belongs to what is called the strategic services category. Besides the shared service centres, they include multilingual customer centres, high-tech repairs centres, software development and expert solution centres. For example, SKYPE and Microsoft companies have opened a software development centre in Prague. The Accenture and ExxonMobil ﬁrms have shared service centres in the capital. The ICON Communication Centre has built customer centres here. The category of ICT expert solution centres includes projects of the IBM and DHL companies (the purpose of the establishment of the IT operations centre in Prague is the management and support of the entire DHL European IT infrastructure from a single site with top equipment). An interesting investment realised in 2015 is the opening in Prague of a corporate ofﬁce of Amazon Company, where 500 people will ﬁnd work in managerial and supporting positions. They are positions requiring high specialisation, especially in the area of IT and HR. The new ofﬁce will house ﬁve sections, for example the shared HR services section and a multi-language contact centre for Amazon employees from all over Europe, and a central Amazon Connections Section for

EU countries for everyday contacts with the employees, which will evaluate worker feedback and propose activities that will help improve the workplaces and working conditions. The Prague ofﬁce will also employ specialists supporting the functioning of Amazon’s distribution centres in the Czech Republic and Poland. The plan provides for the completion of 183 700 sq. metres of ofﬁce space in Prague in 2015, the most since the crisis year 2008. In the ﬁrst quarter of 2015, construction was started of Classic 7 Phase III (6 300 sq. m) in Prague 7, Radlice Park (6 400 sq. m) in Prague 5, and City Deco (13 200 sq. m) in Prague 4. The highest number of ofﬁces under construction is in Prague 4 (101 400 sq. m), Prague 8 (37 700 sq. m), and Prague 5 (33 400 sq. m). At the end of the 1st quarter of 2015, one-third of the ofﬁces under construction already had their renters, according to DTZ. A full 206 300 sq. m of ofﬁce space is under construction and other stalled projects with a capacity of 34 000 sq. m are waiting to be rented. In the ﬁrst quarter, most of the new space was rented in Prague 4 (61%), Prague 5 (19%), and Statistical Data Population