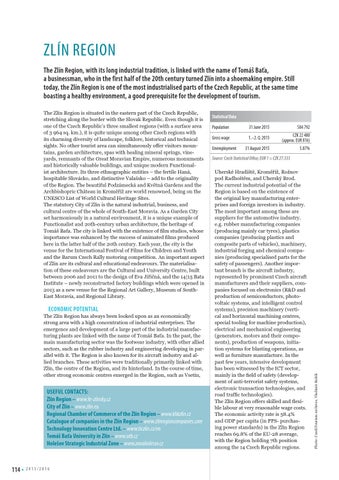 ZLÍN REGION The Zlín Region, with its long industrial tradition, is linked with the name of Tomáš Baťa, a businessman, who in the first half of the 20th century turned Zlín into a shoemaking empire. Still today, the Zlín Region is one of the most industrialised parts of the Czech Republic, at the same time boasting a healthy environment, a good prerequisite for the development of tourism.

ECONOMIC POTENTIAL The Zlín Region has always been looked upon as an economically strong area with a high concentration of industrial enterprises. The emergence and development of a large part of the industrial manufacturing plants are linked with the name of Tomáš Baťa. In the past, the main manufacturing sector was the footwear industry, with other allied sectors, such as the rubber industry and engineering developing in parallel with it. The Region is also known for its aircraft industry and allied branches. These activities were traditionally primarily linked with Zlín, the centre of the Region, and its hinterland. In the course of time, other strong economic centres emerged in the Region, such as Vsetín,

Uherské Hradiště, Kroměříž, Rožnov pod Radhoštěm, and Uherský Brod. The current industrial potential of the Region is based on the existence of the original key manufacturing enterprises and foreign investors in industry. The most important among these are suppliers for the automotive industry. e.g. rubber manufacturing companies (producing mainly car tyres), plastics companies (producing plastics and composite parts of vehicles), machinery, industrial forging and chemical companies (producing specialised parts for the safety of passengers). Another important branch is the aircraft industry, represented by prominent Czech aircraft manufacturers and their suppliers, companies focused on electronics (R&D and production of semiconductors, photovoltaic systems, and intelligent control systems), precision machinery (vertical and horizontal machining centres, special tooling for machine production), electrical and mechanical engineering (generators, motors and their components), production of weapons, initiation systems for blasting operations, as well as furniture manufacture. In the past few years, intensive development has been witnessed by the ICT sector, mainly in the ﬁeld of safety (development of anti-terrorist safety systems, electronic transaction technologies, and road trafﬁc technologies). The Zlín Region offers skilled and ﬂexible labour at very reasonable wage costs. The economic activity rate is 58.4% and GDP per capita (in PPS- purchasing power standards) in the Zlín Region reaches 69.8% of the EU-28 average, with the Region holding 7th position among the 14 Czech Republic regions.

The Zlín Region is situated in the eastern part of the Czech Republic, stretching along the border with the Slovak Republic. Even though it is one of the Czech Republic’s three smallest regions (with a surface area of 3 964 sq. km.), it is quite unique among other Czech regions with its charming diversity of landscape, folklore, historical and technical sights. No other tourist area can simultaneously offer visitors mountains, garden architecture, spas with healing mineral springs, vineyards, remnants of the Great Moravian Empire, numerous monuments and historically valuable buildings, and unique modern Functionalist architecture. Its three ethnographic entities – the fertile Haná, hospitable Slovácko, and distinctive Valašsko – add to the originality of the Region. The beautiful Podzámecká and Květná Gardens and the Archbishopric Château in Kroměříž are world renowned, being on the UNESCO List of World Cultural Heritage Sites. The statutory City of Zlín is the natural industrial, business, and cultural centre of the whole of South-East Moravia. As a Garden City set harmoniously in a natural environment, it is a unique example of Functionalist and 20th-century urban architecture, the heritage of Tomáš Baťa. The city is linked with the existence of ﬁlm studios, whose importance was enhanced by the success of animated ﬁlms produced here in the latter half of the 20th century. Each year, the city is the venue for the International Festival of Films for Children and Youth and the Barum Czech Rally motoring competition. An important aspect of Zlín are its cultural and educational endeavours. The materialisation of these endeavours are the Cultural and University Centre, built between 2006 and 2011 to the design of Eva Jiřičná, and the 14|15 Bata Institute – newly reconstructed factory buildings which were opened in 2013 as a new venue for the Regional Art Gallery, Museum of SouthEast Moravia, and Regional Library.